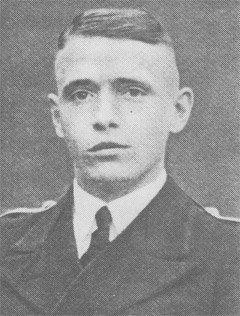 Sonar is very important part of anti submarine warfare. The sonar is a device for detecting and locating objects submerged in water by means of the sound waves they reflect or produce.

But, for any measure there is counter measure. In WW2 the US Navy submarines were equipped with a bathythermograph. Purpose of this article is to explain how the bathythermograph can be used to make surface ships sonar ineffective. In the article will be explain history and technical data of active sonar. Passive sonar (underwater sound detector) is not matter of the article.

Negative refraction: during the summer temperature of water decreasing by depth of the water. Sound wave is bending towards the sea bottom. If submarine is on smaller depth, near the sea surface, sonar can’t detect the submarine. Range of the sonar is bigger if the submarine is merged on deeper depth.

The first practical sonar units have been constructed between WW1 and WW2. The best working frequency was 20 kHz, pulse power was 50 W. Range was 1000 to 1500 metres (good working conditions) or 500 to 700 metres (bad working conditions). In WW2 there are two types of sonar, projection type and panoramic type.

Panoramic sonar: The sonar transmits its sound beam in all directions immediately. The sonar’s receiver receives echo of the sound from all directions and shows possible contact on its screen, with direction and range of the contact.

There was also sonar for detecting depth of submerged submarine. It was additional unit and it works together with standard sonar unit. Working frequency of that additional sonar was from 15 to 100 kHz. Depended about construction, there are: hull mounted sonar and towed sonar.

A bathythermograph is an instrument for recording the temperature at various depths in the ocean. Area of detecting is from –2.2 to 32.2 degrees of Celsius. The bathythermograph may be fitted on a surface ship or on a submarine. During the measurements the ship’s (or the submarines) speed can be up to 22 knots, normally up to 12 knots.

A bathythermograph consists of a thermal and a depth part. Results of the measurements are shown on a bathythermogram. When a submarine is submerged, she cannot use a bathythermograph. Instead of that, she has an apparatus for continuously measuring speed of a sound at all depths of the submarine.

5. How a bathythermograph can be used to make sonar ineffective

There are usually two layers of a thermo cline in summer. One layer is on about 15 to 20 metres of depth, and another one is about 150 metres of depth. Depth of 15 to 20 metres is important. During the summer, at afternoon, if weather conditions are good, a submarine could not be detected from standard (hull mounted) ship’s sonar. In the same time, the depth is good for observing and torpedo launching. If the surface ship wishes to detect a submarine, the ship has to be fitted with towed sonar. In that case, the sonar must be submerged below the thermo cline. Picture number 5 shows situation when the submarine is submerged below the layer of thermo cline and the surface ship is fitted with towed sonar.

Naval persons learn much about navigation, meteorology, maritime law, naval technologies, weapons… But they study oceanography and hydro acoustic, too. In this article I tried to explain why oceanography and hydro acoustic are important part of submarine and counter submarine warfare. A sonar operator can detect submarine easy and precise. On another side, a submarine commander can avoid detection by sonar. But, they have to know all about ocean, because the ocean is their natural environment.