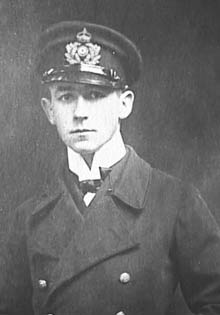 At the beginning of 1915, the already famous SM U 21 (Kptlt. Otto Hersing) after refuelling at the Adriatic Austrian port of Pola was sent to the Dardanelles to assist in Turkey's defence. Hersing, who had shown so dramatically the U-boats worth as a weapon with the sinking of HMS Pathfinder, again proved to be an extremely skilled commander with spectacular success: On 25th May 1915 SM U 21 sank the battleship HMS Triumph and two days later, the unfortunate British lost another battleship to Hersing, when he sank HMS Majestic. On 5th June 1915, the triumphant SM U 21 reached Constantinople harbour showing the false number U-51 to confuse the spies ashore. For his achievements, Hersing was awarded the Pour le mérite. Following this spectacular start of the campaign was an increased German U-boat presence in the Mediterranean, with flotillas being built up at Constantinople, Pola and Cattaro. 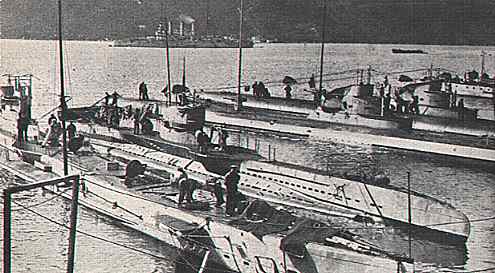 They were assisted by the small but exquisite Austrian submarine force operating from Pola *. The Austrians had already demonstrated their combat readiness, when on 27th April 1915, SM U-V (Kptlt. Georg Ritter von Trapp) hit the French armoured cruiser Léon Gambetta (12,500 tons) at the mouth of the Adriatic in a submerged night attack with two torpedoes - the first time a submarine attacked submerged at night. The cruiser sank within 20 minutes, taking 648 men of its crew of 821 to the bottom of the Otranto Strait. On 5th August 1915, SM U-V very narrowly escaped destruction in a torpedo duel with the Italian submarine Nereide off the Adriatic island of Pelagosa. The Italians fired first but missed, and then one more carefully aimed Austrian torpedo hit its mark, sinking the Italian submarine with all of its crew. Ritter von Trapp, who was to become Austria's leading ace, was then promoted to Korvettenkapitän and in October 1915 took over the captured and converted French submarine Curie ** as SM U-XIV which was very successful in the tonnage war under his command. The small Austrian submarine force proved to be a true elite with an outstanding record: They conducted 79 torpedo attacks with a hit rate of above 90%. At the end of the war though, SM U-XIV along with the rest of Austria-Hungary's Navy had to be handed over to the Yugoslavs and the Imperial and Royal Austro-Hungarian Navy ceased to exist.

At the end of 1915 SM U 35 was taken over by Kptlt. Lothar von Arnauld de la Periere, who was to become the most successful U-boat skipper of all time, a record which still stands. During his war time career, he fired only four torpedoes (one miss) and sank his victims (194 ships totalling 454,000 tons) always strictly according to prize rules with his boat's 88 mm deck gun. His patrol performance was outstanding: in April/May 1916 he sank 23 ships, totalling 68,000 tons on a five week patrol and in July/August 1916 in four weeks he sank 54 ships, totalling 91,150 tons.