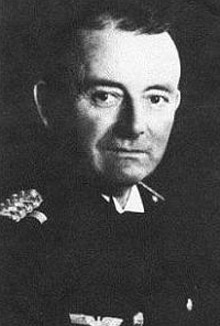 The war did not go well for Germany in 1918: The British hunger blockade was strangling the country and in the field, the American troops were fresh supplements to their Allied colleagues. Against them, Germany had their experienced but battle weary Eastern front veterans, already infected with the virus of communism. Despite some stunning successes in the Spring Offensive in France in 1918, the German Army was not able to decide the war in Germany's favour. And after the German General Staff had decided to recommend negotiations about an armistice, soon the whole German Empire was going down in mutiny, turmoil and chaos.

The German retreat in 1918 had also effect on the trusted U-boats: In October they had to abandon their bases in Belgium and the Adriatic. Despite the enforcement of a massive U-boat building programme, the odds could not be turned in Germany's favour: On 21st October 1918, when Germany had already asked for an armistice, Admiral Reinhard Scheer, the victor of the Battle of Jutland and now Commanding Admiral of the High Seas Fleet, called off the unrestricted campaign:

"To all U-boats: Commence return from patrol at once. Because of ongoing negotiations any hostile actions against merchant vessels prohibited. Returning U-boats are allowed to attack warships only in daylight. End of message. Admiral"

The U-boat war ended as it had begun in 1914 - with a bold but futile move. SM UB 116 (Oblt.z.S. Emsmann) with a volunteer crew of 34 officers penetrated Hoxa Sound at Scapa Flow on the 28th to attack the Grand Fleet. But the boat was detected by hydrophones and sunk by mines with the loss of all hands. The two brave but fruitless attacks on the main British fleet base (SM U 18 and SM UB 116) were not forgotten in Germany and in the next war in 1939, Kptlt. Günther Prien was finally able to pull a raid on Scapa Flow through. On 14th October 1939, U-47 sank the battleship HMS Royal Oak and escaped unscathed - until now the most daring deed of a submarine skipper ever.

In one of the last U-boat actions in the Mediterranean one man was involved who should become most important for the future of the U-boat: Karl Dönitz. After a successful night surface attack on a convoy in the night of 4th to 5th October 1918 with his boat SM UB 68, in the morning hours of 5th October he tried a second submerged attack. Due to malfunction, his boat got out of control and he was forced to surface blowing his boat's emergency tanks and scuttle his command to rescue his crew. Being picked up by a British destroyer he later spent a long time in British prison camps. After his release he only stayed in the Navy because of his hope that Germany would at some point in the near future have U-boats again. In the Second World War, an elder and more seasoned Dönitz was to lead the U-boat to its highest successes - but also to its ultimate defeat.

Before the last curtain fell over the battlefields in the Atlantic and the Mediterranean , the U-boats left the scene with a bang. On its return from the Med, SM UB 52 (Kptlt. Kukat) spotted a British battle group just outside the Strait of Gibraltar. After penetrating the destroyer screen, Kptlt. Kukat fired the final torpedo salvo of the war on the battleship HMS Britannia. Deadly wounded, the proud ship of the line sank off Cape Trafalgar the place of the Royal navy's greatest victory: a bad omen for the future of british naval power.

In November 1918, SM U 135 (Kptlt. Johannes Spieß) was given what can only be called the most peculiar U-boat mission of all times: actions against ships of its own navy. Together with the 4th Torpedo boat Half-Flotilla, SM U 135 ended a mutiny aboard two German battleships (SMS Thüringen and SMS Helgoland) with the threat of torpedoing the ships. But mutiny was still spreading amongst German ships and even the ace of aces, Lothar von Arnauld de la Periere, returning from his first and last patrol with the new U-cruiser SM U 139, where he was very nearly killed by his last victim *, was forced to hand over his command to the mutineers.

The strange mission of SM U 135, however, was the last U-boat action of the war. From late November 1918 until April 1919, according to armistice conditions, the 176 operational U-boats ** were handed over to Britain and interned in Harwich, partly under abasing conditions for the Germans: The White Ensign had to be hoisted on top of the Kaiser's Ensign as if the boats were taken as prizes by the Royal Navy and the British sailors looted the boats, stealing all loose equipment they could lay hands on. The U-boats, all in all representing a value of about 207 million Gold Mark, rusted in port until they were dispersed among the allies ***, used for tests and later scrapped. Many nations, among them the USA and Japan, took advantage of the high technological standard of the German boats and built new classes of submarines after their German models - although the copies were never as good and as successful as the originals. In the Treaty of Versailles, which by the whole of Germany was regarded as extremely unjust, the defeated, diminished and humiliated German Empire was prohibited to build or possess U-boats in its minute fleet, which was reduced to a shadow of its former self.

The report of the end of the first U-boat war in history leaves us with the need of a resumée.

The Imperial German Navy started the war with 28 U-boats with an additional 344 commissioned. In November 1918 no less than 226 boats were under construction.

The ease and skill with which the German engineers developed and built the most sophisticated warship of that time can only be admired. Without any computer assistance, about 25 different types of U-boats for several different purposes - e.g. merchant submarines, long range cruisers, coastal and mine warfare vessels - had been designed (see part 7).

Their technological standard was so advanced that in 1939, when the U-boats went again to war, the boats of the "Kriegsmarine" were not very different from their Imperial German ancestors. 178 U-boats were lost, with nearly 5,000 men killed, which equals a casualty rate of above one third - a heavy blood toll for some striking successes.

Note If you'd like to see how these commanders compare to their World War Two counterparts check this out.

The U-boat had successfully demonstrated its deadly potential and had proven to be a decisive weapon of war. As the unrestricted U-boat campaign was considered a political issue and as the reluctant politicians did not comprehend the military necessities, this powerful military instrument was used to late and thus the U-boats were not able to turn the tide for Germany. However, they cannot be blamed for the lost war. Faithful until the end, Germany's submariners very nearly brought their country victory in a war, where it was vastly outnumbered and out gunned right from the start of it. Why was the war lost then? Großadmiral Alfred von Tirpitz, creator of the German High Seas Fleet knew the answer:

"The German people have not understood the sea."

These were wise words, although they had very little effect: From 1939 to 1945, the naval dimension of warfare still eluded the German leaders, resulting in another lost war for the country. 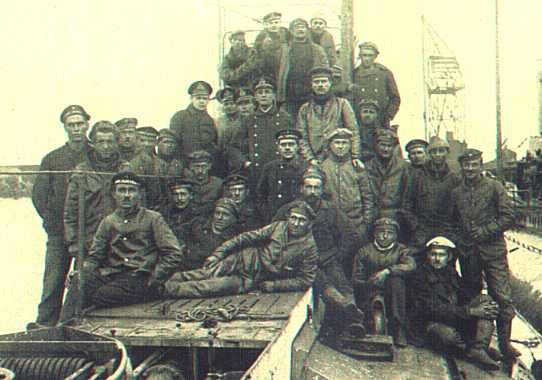 The last thought in this essay should be spent on the men having served on their submersible torpedo boats roaming the seas under extreme conditions. These men were - despite some glorious as well as tragic events, despite the Allied and German propaganda - neither heroes nor pirates. They were just young sailors - nearly all of them were under thirty - performing their difficult duty on and beneath the waves in the true Nelsonian sense as the British sailors did theirs: the latter "For King and Country", the former "Für Kaiser und Reich".

*      In a unique event the torpedoed ship - an old Portuguese gunboat - just sank over his head and
very nearly managed to draw SM U139 with it to the bottom of the sea.
**    8 U-cruisers, 62 ocean going U-boats, 64 UB class coastal vessels, 42 UC class minelayers.
***  10 boats were taken over by the French Navy for permanent service.
**** See Chapter 7 for more detailed information.