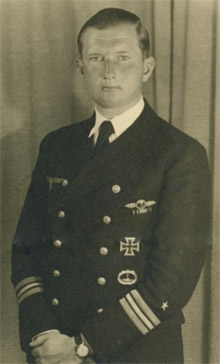 Hermann Lauth joined the Kriegsmarine in 1939 and belonged to the XII/39 Crew. He finished his U-boat training and U-boat construction familiarization (Baubelehrung) in Jan 1943 and was then assigned to U-959 as 1st Watch Officer (I WO). He served on the boat until April 1944 (one 21 day patrol) when he was sent for U-boat commander training with the 23rd Flotilla at Danzig.

Oblt. Hermann Lauth took command of the type VIIC/41 U-boat U-1005 on 3 July 1944. After working up, the boat was assigned to the 11th Flotilla at Bergen, Norway. Lauth took U-1005 on two patrols from Norway, the first being 30 days. One day into the second patrol, on May 4, the ceasefire order was received and Lauth returned to Bergen and surrendered his boat on 14 May.