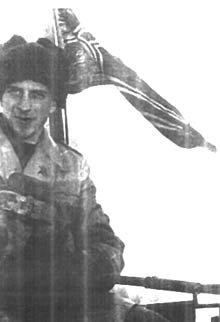 Hans Möglich joined the Kriegsmarine in 1935. He served as a Watch Officer on the torpedo boat Albatros from Dec 1939 to Oct 1940 before commencing U-boat training.

In April 1941 he was assigned to Baubelehrung (U-boat construction familiarization) and from June 1941 became IWO (1st Watch Officer) on the newly commissioned U-130 under Kals, serving until April 1942, when he left for U-boat commander training. He spent 77 days at sea over two patrols, during which U-130 was part of the first wave of U-boats to hit the American coastline in Jan 1942 in Operation Drumbeat (Paukenschlag).

Hans Möglich took command of his own boat, the new type IXC/40 U-526, on 12 Aug 1942 and spent the next few months engaged in working up exercises in the Baltic.

On his only operational patrol Möglich and his boat were part of Wolfpack Sturmer in the extensive operations against convoys SC 112 and HX 229. The boat scored no hits.

Möglich's boat sunk by mine in port
On his return from his third and last patrol in her on 14 April 1943 KrvKpt. Rolf Rüggeberg's U-513 was met by one of her type IX sister boats, Kptlt Möglich's U-526, as they waited for a minesweeper to escort them to base at Lorient, France. Being the senior officer, Rüggeberg should have been first in line behind the minesweeper, but Möglich, eager to enter port after 63 days at sea, rushed ahead of Rüggeberg. One mile from port, the minesweeper had left the boats for them to continue to dock when U-526 hit a newly-laid British mine and exploded in a huge blast, ripping the boat in two. 42 died, including Möglich, and only twelve survived, nine of them wounded. U-513 moored unscathed amid frantic rescue operations. (Blair, 1998)