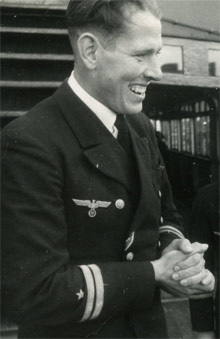 Its history and the 7 grades.

The Knights Cross was a variation of the sought after Iron Cross which had 7 grades;

The Knights Cross was a highly respected decoration and among U-boat men it was the greatest honor one could achieve for many. U-boats crews took great pride if their captain received this medal and sometimes it was added to the boat's insignia (on Schnee's U-201 for example).

U-boat captains would often joke about having "an itchy neck" (Halsschmerzen in German) that could only be cured by wearing the Knights Cross ribbon :)

Only 27 men received the Knights Cross with oak leaves, crossed swords and diamonds and both the lucky ones in the German Navy were U-boat commanders.

The highest grade of the Knights Cross (Knights Cross with Golden Oak Leaves, Swords and Diamonds) was tailored for Hitler's favorite fighter, Oberst Hans-Ulrich Rudel of the Luftwaffe, which destroyed more than 500 Russian tanks (and a battleship at Leningrad!) in his dual-cannon equipped Ju-87 Stuka aircraft in over 2500 combat sorties!