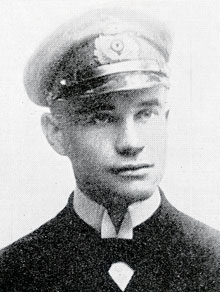 Waldemar Kophamel entered the Navy April 12, 1898 with the rank of Kadett and began his training with the SMS Stosch under the command of Captain Ehrlich participating in various cruises in Norway, Scotland, Mediterranean, North Africa, Spain and Canary Islands.

Between 1900 and 1901 he attended several specialized courses including those of artillery, torpedoes, and naval infantry. Promoted Leutnant zur See in September 1901 was aboard the battleship SMS Kurfürst Friedrich Wilhelm. Later he obtained his first command on the torpedo boat S 3 is part of the II Division Torpedo in Wilhelmshaven, conducted by the Fregattenkapitän Franz von Hipper, then in 1904 he was transferred to the Second Torpedo Flotilla. Was promoted to Oberleutnant zur See for boarding on the light cruisers SMS Niobe and SMS Thetis with which he took part in operations in East Africa.

In 1906 he experienced in the first German U Boot U-1 under the command of Kapitänleutnant Boehm Bezing and subsequently perfected his knowledge on the U boats U-2 and U-9. In 1910 he was assigned to the battleship SMS Westfalen. He attended the Naval Academy in Kiel from 1911 to 1913, then was part of the General Staff of the Second Fleet on the battleship SMS Ostfriesland under the command of Vice Admiral von Lans.

At the beginning of hostilities he was assigned to the command of SM U-35 which he held until November 12, 1915, when he was appointed commander of the Submarine Flotilla at Pola. In July 1917 he again took command of a U-boat, this time the large cruiser U-151 and later that of the U-140 he held until the end of the war. During the war sank 56 ships over 160,000 tons. Kophamel was the seventh officer submariner in 1917 to obtain the coveted decoration 'Order Pour le Mérite. He received the Pour le Mérite personally from the German emperor Wilhelm II. The U 151 successfully completed a patrol of 117 days and covered 12,000 nautical miles.

Remaining in service after the war, he was commander of the intersection Strassburg, until August 1920 he was discharged with the rank of Fregattenkapitän. He died in Plön on November 4, 1934. In his memory was christened with his name the submarine support ship Waldemar Kophamel, launched May 15, 1939, which was later sunk in 1944 by a British air attack in the port of Gothanhafen.