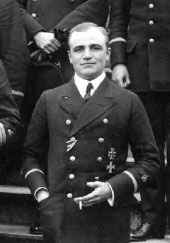 Serving as CO of U 75 and U 102 Beitzen was not one of these men that would become a topscorer in the U-Boat war. However there is one story that gives him his place in history;

On 29 May, 1916 he laid a 38 piece minefield with U 75 just outside the entrance of Scapa Flow. The very same day the HMS Hampshire left Scapa for Russia as the situation on the Eastern Front became critical and she was to play a crucial part in that. On board she had Field Marshall Lord Kitchener and his general staff. They were to turn the tide of the war in Russia.

Only 10 miles outside Scapa Flow the armored cruiser ran on one of Beitzen's mines in foul weather and sank in minutes, leaving only 14 survivors. Great-Britain's most famous military leader and a legend in his own time was killed and nothing was to stop Russia from defeat and revolution.

Beitzen later went on to command U 102, which was lost with all hands in late September 1918 in the Northern Barrage east of the Orkney Islands. The wreck of U 102 was located during a sonar sweep in 2006 and positively identidfied by divers in 2007.