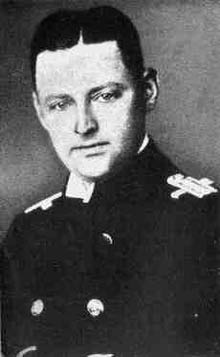 Admiral Wilhelm Franz Canaris, head of the Abwehr (German military intelligence service) from 1935 to 1944, was one of the most interesting and mysterious individuals forever. He was born on 1st January 1887 in Aplerbek (Germany). As a young man he decided to get naval career and after that he passed usual education and training and became naval officer.

In the beginning of the First World War he served on the German Navy light cruiser Dresden. At that time Canaris had rank of Oberleutnant zur See. The ship was firstly in the Caribbean waters, than headed for the South Atlantic and passed Cape Horn. After that the ship joined the German Navy East-Asiatic Squadron, under command of Vice-Admiral von Spee. When the Squadron was defeated in the Battle of the Falkland Islands, light cruiser Dresden was the only ship that managed to escape. After that the ship headed around Cape Horn and for some time the ship successfully disturbed British merchant routes in the waters of Southern Chile. The Royal Navy found the ship on 14th March 1915, near the Chilean coast. In order to avoid capture of the ship by the Royal Navy, the ship's crew abandoned and scuttled the ship.

The Chilean Government interned the German crew on a Chilean island in the Pacific. Canaris decided to take his chances and he escaped, leaving the island in a small fishing boat, reaching Chile he went to the German Embassy in Santiago. Officials from the Embassy gave him some money and a false passport. Canaris continued his travel over the Andes (in the winter!) and finally arrived in Buenos Aires, Argentina. Officials from the German Embassy in Buenos Aires helped Canaris to get aboard the Dutch steam ship Frisia enroute to Rotterdam from where Canaris went to Berlin. After he reported himself in the Admiral Naval Staff in Berlin he was welcomed as a hero.

Canaris was decorated with the Iron Cross (1st and 2nd classes) and on 16th November 1915 he was promoted to the rank of Kapitanleutnant. Because of his courage and experience Canaris was sent to Special Command in Spain.

In Spain Canaris was directly responsible to Admiral Naval Staff in Berlin. Officially, Canaris was in the Special Command in Spain from 30th November 1915 to 20th October 1916. In Spain Canaris was an intelligence officer. He was collecting information about the Allies' merchant traffic (convoys) and he ensured supplying of German ships and (specially) submarines. Finally, British intelligence officers in Spain uncovered Canaris' activities and he had to leave Spain.

On 1 October 1916 German submarine U-35, under command of Kapitanleutnant Arnauld de la Periere, picked up Canaris and other two German agents in Spanish port Cartagena and brought them to Austro-Hungarian port Pula (Pola). Canaris went to Germany, for recuperation and training.

Submarine commander during WWI
From 2nd January 1917 to 1st June 1917 Canaris was in the Submarine school where he trained for a submarine commander. Before the war he served as a company officer in the 1st torpedo division and later as a watch officer on torpedo boats. He also served as a watch officer and signalling and intelligence officer on the light cruiser Dresden. He therefore had enough knowledge of navigation and operations with torpedoes. Training in the Submarine school probably wasn't too hard for him as a result. After the training in the Submarine school he was for a time, from 2 June 1917 to 11 September 1917, commander of submarine U-16. His command was just continued education and training for future tasks.

From 16 September 1917 to 30 September 1917 Canaris was placed to the disposal of the leader of the German Mediterranean submarine flotilla. During the period Canaris left Germany and travelled (probably by train) to main Austro-Hungarian naval base, Pula (Pola). Pula was (and now is) town placed in the Northern Adriatic, on the Southern part of Istrian peninsula. The Austro-Hungarian Fleet was in Pula and German also used the place as their command place. In Bay of Pula was anchored old Austro-Hungarian cruiser Maria Theresia. Germans used the ship as submarine base and the Mediterranean submarine flotilla command place. Other German submarines operating in the Mediterranean were in Kotor (Cattaro), in the Southern Adriatic and in Istanbul, Turkey.

From 1 October 1917 to 27 November 1917 Canaris was Admiral-Staff-Officer and Acting-Leader of the German Mediterranean submarine flotilla. It was quite unusual. In spite of his experience and personal courage, Canaris hadn't enough experience to be leader of the Flotilla that operated on such a great war theatre - the Mediterranean, the Adriatic, the Aegean Sea and the Dardanelles. But, the Mediterranean submarine flotilla was under direct command of Naval Staff in Berlin and could be that members of the Naval Staff wished to have in the Flotilla their own confiding person.

From 14 March 1918 to 30 April 1918 Canaris was Admiral-Staff-Officer in the Staff of the Leader of Submarines Mediterranean (the German Mediterranean Submarine Flotilla) at Pula.

Between missions Canaris spent time in the Staff of the Flotilla (onboard the anchored old cruiser Maria Theresia) and in the Austro-Hungarian Fleet command (placed on wharf on the end of the Bay of Pula). Serving at Pula at the same time were some other very interesting characters for example Oberleutnant zur See Karl Dönitz (future leader of U-boats in WWII) and Admiral Miklos Horthy, the last Commander in Chief of the Austro-Hungarian Fleet and leader (Regent) of Hungary from 1920 to 1944.

Career after World War One
After the war he continued his career in the German Navy. Until 1935 Canaris was serving in different positions; on German ships and at naval staffs. But, even when it was forbidden for Germany to re-establish any military intelligence services; Canaris was at a few times involved in some suspicious activities. Most of the activities were taken in order to insure money for German intelligence activities in foreign countries. A few years after World War One Canaris re-established the Etappendienst. Canaris found his old colleagues and friends from the war and he also recruited some new agents all around the world.

Rising to rank of Admiral Wilhelm Canaris became head of German military intelligence, the famed Abwehr, on 1 Jan 1935 and led it for 9 years. The Abwehr eventually became one of the centres for opposing Hitler in the war and one of Canaris' men, Hast Oster, helped orchestrate the opposition and in April 1943 many of Oster's men were captured and the Abwehr came under serious question by the Nazis. Canaris was dismissed in Feb 1944 by a furious Hitler after defections of German agents in Turkey, put under house arrest and then finally arrested and on 9 April 1945 executed, by slow strangulation, at the concentration camp at Flossenburg by the Gestapo only 2 weeks before American forces liberated the camp.

Canaris remains mystery to this day. Some sources claim Canaris worked for British Intelligence but the most probable explanation is that Canaris was an old-fashioned German patriot, monarchist and anti-communist. Perhaps in the beginning of the Nazi regime Canaris wasn't anti-Nazis but he became one very soon. He played his own game against Nazis and he succeeded for a long time. But, under a regime that was in the Germany of that time, Canaris was bound to be uncovered sooner or later. The whole truth about his activities is still uncovered. Perhaps it's for the better. Canaris was and still is a legend. And all legends have to remain mysterious.

Special thanks to Robert Derencin on this article.