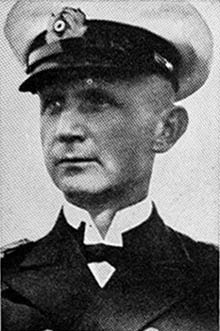 Apart from a brief sortie forth, during the Battle of Jutland in 1916, the German High Seas Fleet had spent the war bottled up in port. Towards the end of October 1918, as peace negotiations were taking place, the higher echelons of the Imperial German Navy, in what they saw they saw as an attempt to restore their honour, planned an all-out attack on the British Grand Fleet. The plan called for twenty-four U-boats to carry out certain tasks before the High Seas Fleet put to sea.

On 25 October 1918 submarine UB-116 left Heliogoland under the command of Oberleutnant zur See Joachim Emsmann, friend and classmate of Robert Ramm at the German Naval Academy and brother of Ramm’s wife Gerda. Emsmann’s task was to enter the British Naval Base at Scapa Flow, Scotland, off the north coast of Scotland, and attack larger ships, so as to weaken the British fleet prior to the attack by the German High Seas Fleet.

On 28 October Emsmann’s submarine entered Hoxa Sound, Scapa Flow. The British had laid a minefield in Hoxa Sound. The minefield had underwater microphones called hydrophones, allowing shore-based operators to pick up the sound of an approaching submarine. UB-116 was picked up by hydrophone at 2121. At 2332 an electrical cable laid in loops on the seabed sent a signal to a device called a galvanometer, indicating the UB-116 was in the minefield. The operator flipped a switch and a row of mines exploded. The next morning the surface was covered with oil and air bubbles were rising steadily. Patrol boats dropped depth charges that brought debris to the surface, including a jacket. British divers visited the wreck on 29 October and on 4 November they returned and recovered UB-116’s logbook.

Hans Joachim Emsmann and all of his crew were killed. Within the space of nine days Gerda Ramm had lost her husband and her brother. Due to mutinies on board the ships of the High Seas Fleet the German surface ships were unable to put to sea.