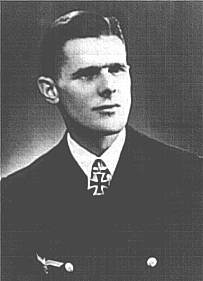 Following is a write-up from one of his post-war students
"He was one of my professors later at the University of Applied Science in Suderburg. He was for a long time Dean of this "small" on water and marine engineering specialized "‘school". He was famous for his abilities in math and especially on probability calculations and for his habit to write long formulas on the blackboard with his right and to clean it at the same time with his left hand. He didn't talk much about the war time. There is only one story that, on a student trip he suddenly got excited, stopped the bus, got out and pointed down to the bay telling the students "... look guys, there I had to give up my boat to the Brits ...".

In the world of Germans "water" engineers he was what we name in Germany the "‘graue eminenz’ der wasserwirtschaft". He was really loved by his students. He lived in the city of Uelzen and died only a few years ago (e-mail correspondence, 2010).