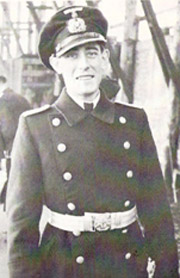 13 Apr 1940
While attempting to attack the destroyer screen around HMS Warspite U-48 was depth charged, but escaped with minor damage. (Sources: Blair, vol 1, page 152)

25 Aug 1940
In the early morning, the boat sank two ships from convoy HX 65A and was then forced to dive when attacked by HMS Godetia, but U-48 evaded the depth charge attack and escaped unscathed.

22 Mar 1941
The boat was depth charged by British destroyers and suffered slight damage.

29 Mar 1941
The boat was fired on by several merchant ships while attacking the unescorted convoy HX 115 south of Iceland, moving through the columns at night on the surface, and at least one of the freighters, the British steam merchant Oakworth made an attempt to ram her. However, U-48 was undamaged and even managed to escape without being attacked when the escorts eventually arrived in the morning.

U-48 returning to base after a successful patrol.

Unlike many other U-boats, which during their service lost men due to accidents and various other causes, U-48 did not suffer any casualties (we know of) until the time of her loss.

There was another U-48 in World War One
That boat was launched from its shipyard on 3 Oct 1915 and commissioned into the Imperial Navy on 22 Apr 1916. The Naval war in WWI was brought to an end with the Armistice signed on 11 Nov, 1918. Read about SM U 48 during WWI.