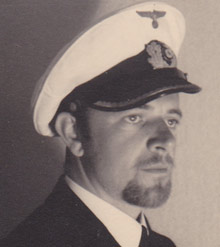 Gerhard Schaar began his naval career in October 1937. He served on the destroyer Erich Giese, which was sunk during the occupation of Norway in April 1940. After some months on shore in Narvik, he served as training officer in the Marineschule Mürwik (Naval Academy) before transferring to the U-boat force in February 1942.

After two patrols in U-704, in April 1943 he took over command of the type VIIC U-boat U-957, which was attached to the 11th Flotilla and was in action in Arctic and northern waters. Schaar won his Knights Cross for leading the landing operation on the Russian island of Sterligova, where a radio station was destroyed in September 1944.

In April 1945 Schaar commissioned the type XXI Elektro U-boat Elektro boat U-2551. It was run aground and wrecked one month later when Germany surrendered.