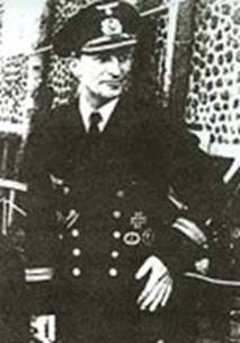 One of the oldest Commanders
Korvettenkapitän (zV) Walter Burghagen was one of the oldest U-boat commanders of WWII to depart on patrol when he took his boat, the minelayer U-219, out from Bergen, Norway on 22 Oct 1943. He was 52 years old when he left for his 72 day patrol, arriving safely in Bordeaux, France on 1 Jan 1944.

He commanded the boat for the rest of the war, taking her out on another long patrol ending in the Fast East at Batavia in Dec 1944. The boat was taken over by the Japanese at Jakarta, Indonesia on 8 May 1945.

Walter Burghagen served in the Imperial German Navy (Kaiserliche Marine) and was a watch officer on SM U 44, SM U 49 and SM U 50 in 1916. He was taken POW in Nov 1916 and was released in 1919. Burghagen was promoted to Oberleutnant zur See on August 4, 1919 with a seniority of April 26, 1917, the date he would have been promoted to that rank had he not been captured.