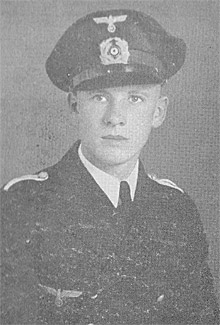 Though listed in Busch and Röll as being part of Crew 38, Buscher is not listed in the 1941 or 1942 Rangliste.

In 1957 Hans Buscher was second officer on the Pamir, the famous Flying P-Liner sailing ship of the German shipping company F. Laeisz. On 21 Sept 1957 the ship was hit by Hurricane Carrie and sank shortly afterwards due to heavy listing to port. Hans Buscher died in a lifeboat two or three days later. Only six survived from the crew of 86 (Wikipedia).