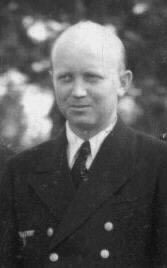 Helmut Bach served on the highly successful merchant raider Pinguin (Schiff 33) from Feb, 1940 to May 1941. From June 1941 to March 1943 he was a Commander in VP 16th Flotilla (Vorpestenboote), after which he joined the U-boat force and began his training there.