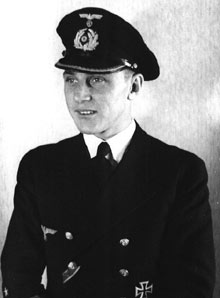 Theodor Fahr joined the German Navy (Reichsmarine) in 1930. he served as a gunnery officer on the battleship Gneisenau from May 1938 to July 1940. In that role he took part in sinking the British aircraft carrier HMS Glorious and destroyers HMS Acasta and HMS Ardent on 8 June 1940.

First U-boat Command
On 24 April 1941 Kptlt. Theodor Fahr commissioned the new type VIIC boat U-567. After 4 months in training Fahr took the boat out on his first and only war patrol as commander. He sank one ship and returned to base after 39 days. He was replaced as commander by the ace Engelbert Endrass.

Fahr was a gunnery officer on the heavy cruiser Admiral Hipper from Oct to Nov 1941 and then served in staff position with Naval Group West until Jan 1944. Fahr became the Second Gunnery Officer on the super battleship Tirpitz in Jan 1944.

Theodor Fahr served as the second artillery officer on the battleship Tirpitz from January 1944. He died on 12 Nov, 1944 when the mighty ship was finally sunk by the British at Tromso, Norway after repeated attempts (Busch & Röll, 1999). About 1000 German sailors perished with their ship on that day (about 700 survived).