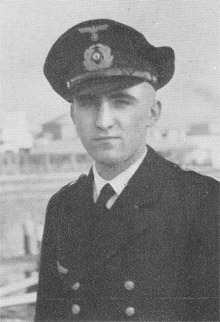 Hans-Ludwig Gaude joined the Kriegsmarine in 1936, and was part of the Olympia Crew. He served in coastal artillery and minesweepers before joining the U-bootwaffe (U-boat force) in 1941. After serving as 1WO (1st Watch Officer) on U-83 and U-558, he served as a Konfirmand (Commander in training) on U-19 before taking command of her in 1942.

He left U-19 in 1943 to join the Admiral's staff at Black Sea Command, moving to the 27th (Training) Flotilla at Gotenhafen to become a training officer in 1944, with an interval as Baubelehrungs (construction familiarization) Commandant for U-883.
He attended Baubelehrung at Danzig in preparation for commissioning U-3525, a type XXI Elektro U-boat Elektro boat in January 1945, handing her over to Kptlt. Franz Kranich in April.

Kptlt Gaude took over command of a smaller type XXIII elektro boat, U-2343, a training boat with the 4th (Training) Flotilla, eight days before the end of the war, scuttling her in Flensberger Förde (inlet) on 5 May 1945. He then commanded a naval infantry battalion for two days, before being interned and serving in the German Minesweeper Administration until 1947.

Hans-Ludwig Gaude died at Altenholz in Schleswig-Holstein on 1 November 2003 at the age of 87.

(Special thanks to Mr. Fernando Almeida for details on date of death.)