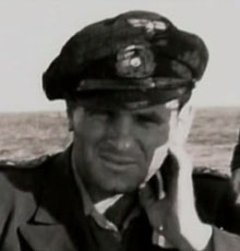 Klaus Harney belonged to Kriegsmarine class of 1935. He trained on the old battleship Schleswig-Holstein from May 1939 and then in Oct went to the Naval College at Mürvik. In Mar 1940 be was sent to the destroyer Z 5 Paul Jacobi where he spent one year.

In March 1941 Harney joined the U-boat force and went through U-boat training until October when he went out to sea on the U-84. He went as commander in training on one patrol with the boat (16 Oct - 18 Nov 41) - no ships sunk. In Dec he was sent to oversee the final construction of a U-boat and on 31 Dec 1941 he took command of his U-756.

Two photos of Klaus Harney on his boat, the U-756.