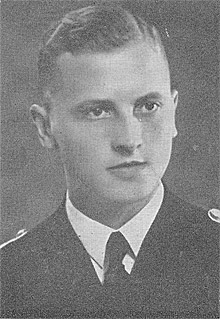 In May 1941 Alfred Manhardt von Mannstein began U-boat construction familiarization (Baubelehrung) in preparation for his own command, and on 18 June 1941 he commissioned the new type VIIC U-boat U-753 at Wilhelmshaven (Busch & Röll, 1999). The next six months were spent working up boat and crew in the Baltic.

Alfred Manhardt von Mannstein and his entire crew of 47 were lost when the boat was sunk on 13 May 1943 by by depth charges from the Canadian corvette HMCS Drumheller, the British frigate HMS Lagan and from a Canadian Sunderland flying boat (RCAF Sqdn. 423/G) (Niestlé, 1998). This was during the massive convoy battles in the North Atlantic in May 1943 when the fortunes of war turned decisively against the U-boats, never to return.