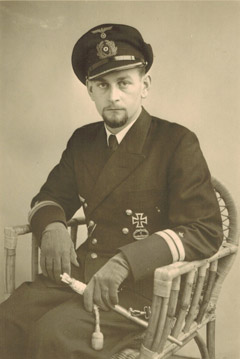 Gerd von Pommer-Esche joined the Kriegsmarine in 1937. He served as a Raümboot commander with the 1st R-Boat Flotilla from March 1940 to Jan 1941 (Busch & Röll, 1999). R-boats were small minesweepers used in various roles in all theatres of war.

During the invasion of Norway Lnt. Gerd von Pommer-Esche's R-21 was in action at Horten in Oslofjord on April 9, following R-17 into the harbour to land German troops at the start of the invasion. R-17 was sunk after landing troops, but R-21 managed to completed the mission and withdraw, despite being twice hit by shellfire (Haarr, 2009).

Von Pommer-Esche went through U-boat training from Jan to July 1941, when he began his U-boat construction familiarization (Baubelehrung) at Bremen for the type IXC U-boat U-159 being built there. On 4 Oct the new boat was commissioned by Kptlt. Helmut Witte who would become one of the most successful commanders of the war. Pommer-Esche was 1st Watch Officer (I WO), and served in that role until Feb 1943 (Busch & Röll, 1999).

Von Pommer-Esche went on three patrols in U-159, 208 days at sea, on the last two patrols going to the Caribbean and South Africa (Busch & Röll, 1997). U-159 was highly successful, and during von Pommer-Esche's service 22 ships (114,235 tons) were sunk and one damaged (Rohwer, 1998). Witte was awarded the Knights Cross for these successes.