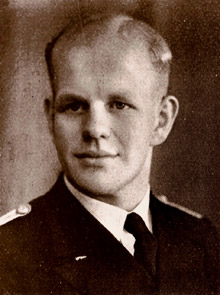 
Karl Jäckel joined the Navy in April 1937 at the age of 23. Since April 1940 he rode on U-29 under the command of Kptlt. Schuhart. When the first watch officer Georg Lassen left the U-29 and commissioned U-160 he requested that Karl Jäckel would follow him which he did. He was then for 4 patrols on board and luckily left the U-boat along with Georg Lassen, before U-160 was sunk a month later. Georg Lassen called him his "number one man".

In 1944 he became the Obersteuermann on the type VIIC U-boat U-907. After the surrender Karl Jäckel was one of the crew members that had to bring the U-boat to Loch Ryan, Scotland for Operation Deadlight.