Walter Kaeding started his duty in the Kriegsmarine in April 1935. The two first years he served on the light cruiser Leipzig, and was on this ship for three patrols in Spanish waters during the Civil War in 1936/37.

In September 1939 he changed to the U-boat force and after the training he became a crew member of the newly commissioned U-123. He was on board for all its patrols and took part in all successes that the boat enjoyed. His nearly 700 days on sea is also an outstanding achievement. 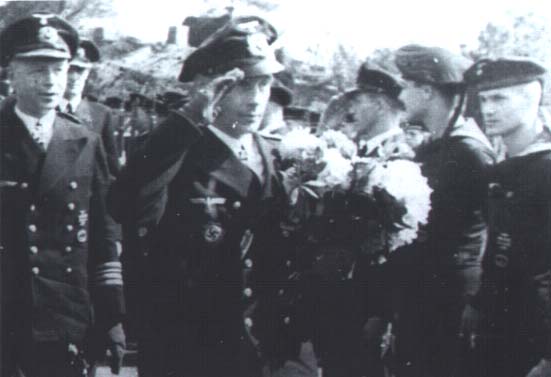 Obersteuermann Walter Kaeding after the decoration with the Knights Cross.
Left behind him is the commander of the 2nd Flotilla Fregattenkapitän Ernst Kals.

He left the boat in June 1944 as Obersteuermann, and after the commander training he was the designated commander for the type XXIII Elektro U-boat U 4713, but the boat was not finished at the end of war.