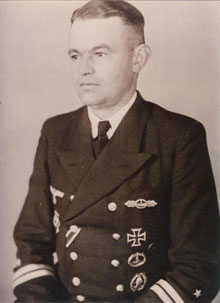 Danger's Hour
The Story of the USS Bunker Hill and the Kamikaze Pilot Who Crippled Her
Kennedy, Maxwell Taylor

If we want to understand Großadmiral Dönitz' actions in the last few months of the Second World War and why he was tried at Nuremberg, we have to go back as far as the second half of the year 1944, when the time for stunning German victories was over for good.

At that time, the Wehrmacht was engaged on the Eastern Front in an increasingly desperate struggle to defend the German countries of Eastern and Western Prussia against an overwhelming Soviet superiority. To support the forces of the German Army, the last remaining big surface units of the German Navy, pocket-battleships, heavy and light cruisers, were assembled in a task force providing heavy artillery gunfire to halt or delay the advance of the Soviet Red Army.

The small town of Nemmersdorf, near the Prussian-Polish border, was the first German soil to be conquered by the Soviets. The 11th Guards Army under the command of General Galitsky had held the town for nearly a week, when General Hossbach's decimated, tired and battle weary 4th German Army threw the Soviets out of the town. The scene unfolding in front of the German soldiers' eyes was hard to believe. Almost everyone in the town had been slaughtered. The troops found dead and raped women nailed to barn doors, children shot dead and civilians crushed and smashed to bits and pieces by tanks which had run over them. In their seemingly unsatiable bloodthirst, the crazed 'soldatnia' even killed 40 French prisoners of war, hailing the soldiers of the Red Army as their liberators. These beastly cruelties, which - though war crimes under every jurisdiction - were never investigated showed clearly what an unconditional surrender to such an enemy meant.

From that, Dönitz deduced the following: By no means should it be allowed for any German, civilian or service person, to fall into the hands of the marauding Red Army. In his staff at the Naval High Command in Berlin an evacuation plan for the Eastern part of Germany (mainly Eastern and Western Prussia) was derived, which was to ensure the transfer of the majority of the population to ports in western Germany. This massive evacuation procedure involved all remaining vessels of the German Kriegsmarine as well as the merchant Navy. Beyond that Dönitz empowered local naval commanders (e.g. Fregattenkapitän Karl-Friedrich Merten, commander 24th Flotilla at Memel) to take precautionary evacuation measures according to the local tactical situation. This order, as well as the whole idea of the evacuation, was well beyond Dönitz' capacity as Commander-in-Chief of the Navy, but nevertheless his orders were executed by his subordinates, often against the resistance of local Nazi party authorities.

With this evacuation over the Baltic Sea, which continued until 9th May 1945, some 2.1 million people, mostly civilians, old age pensioners, women and children and including some 450,000 soldiers could be saved from a rather gruesome fate. When asked, what the greatest achievement and the most glorious deed of the German Navy in World War Two was, the answer should always be: 'The rescue operation in the Baltic 1944-45'. During this period many German naval vessels as well as army units experienced bloody engagements against fiercely fighting Soviet ground, air and naval forces. By fighting on, although the war was clearly lost, they ensured the rescue of their fellow countrymen, in the finest tradition and the only justification of soldiering: Fighting and sacrificing their lives in defence of their country and its people.

The greatest single disaster in naval history took place during these operations in the night of Jan 30/31 January 1945 when the 25,484-ton liner Wilhelm Gustloff was sunk by a Soviet submarine. Well over 6,000 refugees lost their lives during that night, or 4-times the number killed in the Titanic disaster.

However, the rescue operations in the Baltic in 1945 were amazingly successful with only about 1% loss of life according to German records.