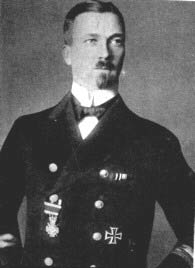 The wreck of UB 31 clearly establishes that she was mined. The boat's exact date of loss is not known, but would have been between about April 26 and May 3, 1918.

The U-boat's destruction has traditionally been linked to an attack by Lord Leitham, Ocean Roamer, and other patrol vessels on May 2, 1918. This attack though was against the already dead UB 78, which had sank on a mine two weeks earlier

Back to the U-boat index