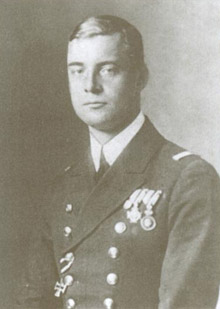 The Terrible Hours
The Man Behind the Greatest Submarine Rescue in History
Maas, Peter

Viebeg entered the Kaiserliche Marine as Seekadett in 1906 and served on the battleship SMS Hessen in 1910. He then became watch officer on the torpedo boat V 190 in the 1st Torpedo Boat Flotilla until joining the U-boat school in October 1915. After commanding UC 10 and UB 20 in the Baltic he was transferred with UB 32 to the Flanders Flotilla in February 1917. He briefly took command of UC 65 and was then commander of UB 80 until the end of the war.

Awarded the Pour le Mérite on the 30 or the 31 of January, probably the 31 together with others. For outstanding leadership and distinguished naval planning and successful submarine operations. Also given in recognition of having sunk a total of 169,656 BRT of enemy shipping (later research has reduced this number quite a bit).