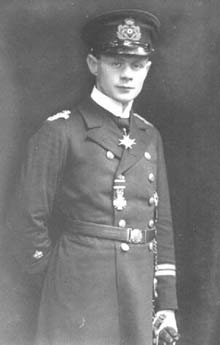 Alfred Saalwachter was born as the son of a factory director. As an eighteen-year-old was on 10 April 1901 cadet of the Imperial Navy, where he began studying at the frigate cruiser SMS Moltke and on the school cruiser SMS Hertha.

His first officer years until war broke out in 1914, he spent almost exclusively with on-board commands, first with the 2nd Sailors Division, then on the battleship SMS Hessen and at the 2nd Werft-Division. On 10 March 1906 he was lieutenant with 23 years at sea and then to 1908 at the 2nd Torpedo-Division used as adjutant of the First Department. He then served in the Great cruiser SMS Gneisenau. In 1910 he was flag lieutenant on board the ships of the line SMS SMS Westphalia Hannover and later, that one aide flag officer, Vice Admiral Hugo von Pohl (1855-1916), who commanded the First Squadron at the time. On 10 April 1911 was promoted to Lieutenant hall monitors and the Admiralty ordered the Navy to Berlin, where he served until March 1915, most recently as Head of Department in the Operations Section.

On 31 March 1915 was Saalwachter flag lieutenant in command of the sea forces on the battleship SMS Friedrich the Great. In February 1916 he was transferred to the U-boat arm. After completion of the submarine school he was from September 1916 to March 1918 as commander of SM U 25, SM U 46 and SM U 94 in use. His success as a submarine commander have been honored with the award of the Iron Cross First Class and the Knight's Cross of the Royal House Order of Hohenzollern with swords. He finished the war as a naval staff officer to the commander of the submarines, Commodore Andreas Michaelsen.

After taking over in the Navy hall monitor was appointed in 1920 lieutenant commander. After various other uses - including in the personnel office of the Navy - he was first Admiral Staff Officer on the staff of the commander of naval forces on the battleship Braunschweig.

On 1 October 1926, he became commander of the Amazon light cruiser and took over a year later as a frigate captain in command of the battleship Schlesien. After his promotion to Captain on 15 October 1928 was hall monitor for two years to the Chief of Staff of the fleet under Vice Admiral Oldekop allocated. Then he was for three years - from 1 October 1932 - as a rear admiral of the Navy as chief of naval military department.

On 2 October 1933 was appointed inspector of the hall monitor marine education. During the next five years, he had a strong influence on the development of the young Seeoffizierskorps. On 1 April 1935 he was appointed Vice Admiral and 1 June 1937 promoted to admiral. On 28 October 1938 he became the commanding admiral of the naval station of the North Sea, appointed in Wilhelmshaven, one of the highest positions in the former Navy.

When war broke out was Saalwachter the command of the Naval Group Command West and was in charge from September 1939 for the conduct of operations in the North Sea, but this leads to many of friction with the Fleet Commander, Vice-Admiral Hermann Boehm, William Marshal and Günther Lütjens. On 1 January 1940, he was promoted to Generaladmiral. Together with Admiral Rolf Carls, Saalwachter was responsible for the tactical management of naval operations in Norway use (companies Weser Exercise), in recognition of his performance he was on 9 May 1940 awarded the Knight's Cross of the Iron Cross.

From the summer of 1940 led Saalwachter the operations of German surface naval forces in the North Atlantic and English Channel until it was in September 1942 provided the commander of the Navy and replaced by Admiral Theodor Krancke. Saalwachter difference a few months after the final change of command from active naval service. He was arrested in July 1945 by the Soviet authorities and sent to the former youth prison Magdalene in Berlin-Lichtenberg. In August, he was there tried by a Soviet military court and sentenced to long terms of hard work. According to another version, he was sentenced to death on 6 December 1945 shot. The exact circumstances are not clear. After the collapse of the Soviet Union, he was rehabilitated in 1994 by the Russian judicial authorities.