What happened on
7 April? 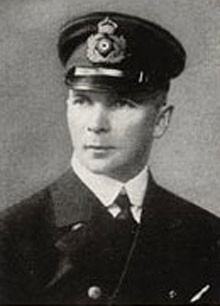 Most people knew him as Rudi. He entered the Kaiserliche Marine in 1901 as a Seekadett. In June 1914 he received the Rettungsmedaille as a Leutnant zur See and was promoted Kapitänleutnant.

He became CO of U24 and was responsible for the sinking of the British battleship HMS Formidable during the very first underwater attack at night on the 1st January 1915 off Portland Bill.

On October 13 1917, during a very stormy weather, he was lost overboard from the conning tower of U-87. One of his shipmates managed to bring him back on board but it was too late. He was subsequently buried at sea between the Shetland Isles and Norway. His 1WO, KL Freiherr Rudolf von Speth-Schulzburg, took over the command of the boat.