The Consolidated PBY Catalina was the most-built flying boat of World War II: 3281 were built in the USA and Canada, and several hundred in the USSR. (The Soviet version was known as GST, MP-7 or KM-2, depending on the engines.) The prototype had flown in 1935, so it was not a modern aircraft, and performance was modest. The PBY was jocularly described as the slowest combat aircraft of the war. But it was a sturdy, reliable aircraft, ideally suited for long patrols over the oceans.

Consolidated's model 28, designed by Isaac Laddon, was an all-metal flying boat, and distinguished itself clearly from its precursors by its monoplane configuration. The US Navy had given the prototype the designation P3Y, but then changed it to PBY because of the Calatina's ability to carry a significant bombload. PB meant "patrol bomber", and Y was the manufacturer letter assigned to Consolidated. For the first production model, the PBY-1, Consolidated received an order for 60 aircraft, in 1935. The first aircraft of this series entered service in 1937. They were followed by 40 PBY-2s, 66 PBY-3s, and 33 PBY-4s; the latter model introduced the large dorsal blisters that became so characteristic for the Catalina.

But the first models built in really large numbers were the PBY-5 and the amphibious PBY-5A, ordered by the US Navy and the RAF by the hundreds. The name Catalina was given to the aircraft by the British, but later also adopted by the USN. It was called Canso by the RCAF. Consolidated had to struggle to meet all orders, not only for the PBY but also for the B-24 bomber. Hence more Catalina's were ordered from the Canadian factories of Boeing and Vickers. Aircraft built by Boeing were known as the PB2B, those built by the Naval Aircraft Factory as the PBN, and those built by Vickers in Canada as the PBV. Many PBYs and PBVs served in the USAAF, and there they were called OA-10. In 1941 the Naval Aircraft Factory, a USN-controlled design facility that had a long tradition in the development of flying boats, produced its own version. The PBN-1 Nomad had a new, sturdier wing, larger fuel tanks, a longer hull, and a taller tail surface. These changes were also incorporated in the PBY-6A and PB2B-2.

The PBY was a quite large aircraft. To keep the engines and propellers away from the water spray, the wing was put on top of a sturdy pylon, and braced with two struts on each side. The wingtip floats were retractable. Compared with its biplane predecessors, the Catalina was much better streamlined. The fuselage itself had a two-step flotation bottom, and a rounded upper side. The fuselage was wider than it was high, an unusual feature for a flying boat, and inside there was only one deck. In the nose, there was a position for a gunner / bombardier. Behind him was the cockpit for the two pilots, and immediately aft of the cockpit there was a cabin for the navigator and the radio operator. Behind them was the flight engineer, whose workplace extended into the wing pylon. Aft of the wing there was a cabin with bunks; finally, there were two waist gun positions, in most versions covered with large blisters.

The gunners' most important role was that of lookouts, but armament of a PBY-5A included a single .50 machinegun in both waist positions, one or two .30 guns in the bow turret, and a single gun in a ventral position. Four bomb racks were installed on the wing, all for loads up to 454kg (1000lb).

The two radial engines were installed in the wing leading edge, just aft of the cockpit. The closeness of the propellers to the fuselage made the Catalina a very noisy aircraft. The two Pratt & Whitney R-1830 radials were very reliable engines, but for such a larger aircraft they were relatively low powered. Especially the later versions, much heavier than the first production models, were somewhat underpowered. After the war, a number of PBY were converted to Super Cat configuration, with R-2600 engines.

The Catalina was designed as a pure flying boat, but in 1939 the first PBY-5A flew: An amphibian, with tricycle landing gear. The mainwheels retracted upwards in the fuselage sides, under the wing, and remained clearly visible. Of course this meant an increase in weight, and therefore a reduction in range. The RAF preferred the pure flying boat model, and only eleven of the more 700 Catalinas that it received were amphibious. In all, 1428 amphibious Catalinas were built.

The PBY was one of the first US aircraft to carry radar. At first this was a metric wave radar with arrays of dipole antennas on the wings, and later a centimetric radar in a fairing on top of the cockpit. A Leigh light was installed under the wing.

The first RAF Catalinas entered service in the spring of 1941. This was just in time to play a role in the hunt for the Bismarck, that was observed on 26 May by a crew that included an American -- a fact that was kept secret at the time, because of the official neutrality of the USA.

In the Pacific the Catalina was the backbone of long-distance reconnaissance units, at the time of Pearl Harbour and thereafter. Mostly their task was to observe, not to attack, but there were units, such as VP-12 Black Cats that specialized in anti-ship strikes.

The situation in the Atlantic was different, U-boats being the largest threat there. The Catalinas were very suitable for the long U-boat patrols, often flown over the Arctic seas to protect convoys to Murmansk. A weakness of the type was its low speed, which gave an U-boat time to dive before it could be attacked. This changed when U-boats were ordered to stay on the surface and fight it out, but that made the Catalina's task more dangerous. John A. Cruickshank received the Victoria Cross for an action in 1944, in which U-361 was sunk --- and Catalina DA-Y limped home with 72 holes in it and a badly wounded pilot. David Hornell also earned a VC in a Catalina, his was awarded posthumously.

A special tool for anti-submarine warfare was a Magnetic Anomaly Detection (MAD) system in a tail boom. This reported the presence of a submerged submarine, assuming that it was not too deep and the aircraft flew low. These aircraft were fitted with special retarding bomb racks, to make the bombs fall vertical, instead of travelling horizontal with the speed of the aircraft. In January 1944 MAD-equipped Catalinas began to patrol the Straits of Gibraltar. 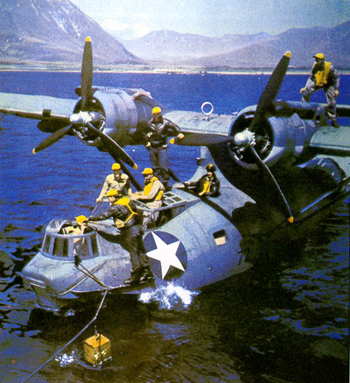 About 40 to 50 Catalinas are still flying today, although none for military operators: Most of them were converted to firefighting aircraft at one stage in their career. Considering the small number of flying boats in service everywhere, that is a considerable number.

38 U-boats lost to Catalina aircraft. + means that the Catalina shared the credit for the sinking.