A Halifax B Mk.VI with Hercules 100 engines

The German Luftwaffe has often been criticised for its failure to develop a four-engined strategic bomber. It is worth noting that the two main four-engined 'heavies' of the RAF were both derived from twin-engined designs. Specification P.13/36 called for a twin-engined bomber able to carry 55000lb of bombs. It resulted in the Manchester, from which the Lancaster was derived, and the Handley Page HP.56. Like the Manchester, the HP.56 would have been powered by two unreliable Rolls-Royce Vulture engines, but it was never built. On second thoughts, Handley Page proposed, and the RAF accepted, a much larger and heavier derivative powered by four engines, the HP.57 Halifax. Originally Bristol Taurus engines were chosen, but they were quickly replaced by Rolls-Royce Merlins. The first flight was made on 25 October 1939.

As first flown, the Halifax B Mk.I was an all-metal, mid-wing monoplane powered by four Rolls-Royce Merlin X engines. The wing had taper on the outer wing panels only. Long-span ailerons and flap occupied the entire trailing edge. It had twin tailfins, of knotted triangular shape. A large bomb-bay in the fuselage was complemented by six small bays in the inner wing panels. The nose had a faired-in gun turret with windows below it, that gave the aircraft a sleek and menacing appearance. There was also a turret in the tail, and the first production aircraft had dorsal and ventral turrets. The ventral turret was not retained. The Halifax had a crew of seven. There was of course a pilot, and three gunners, in the nose, dorsal and tail turrets. The navigator and the wireless operator were seated in the front fuselage, between the front turret and the cockpit. The flight engineer sat behind the pilot. He was kept very busy with adjustments and fuel management. The interior of a Halifax was not roomy, but it was provided with two rest bunks and a toilet.

Production of the Halifax began in October 1940, a year ahead of the more famous Lancaster. A big organisation was created for the large-scale production of Halifaxes. On 10 March 1941 six Halifaxes flew the first operational mission, an attack on Le Havre. The next night three Halifaxes flew over Germany. But the build-up of the Halifax force was slow. Cures had to be found for a large number of theething troubles.

The Mk.II with more powerful 1280hp Merlin XXII engines, appeared in early 1942, and during its production run various modifications were made. To reduce drag, the nose turret was replaced by the smooth "Z-fairing", and later by a perspex bubble with a single machinegun. A number of other modification were also made to reduce drag. The tailfins were replaced by rectangular ones. H2S navigation radar was installed in a ventral bulge. In early 1943 the B Mk.V entered service, similar to the B Mk.II in all but its landing gear, because there was a shortage of Messier undercarriage legs. Unfortunately, the poor production quality of the Dowty legs resulted in a large number of failures. The Halifax was not easy to land, and accidents were frequent.

The B Mk.III, appearing in 1944, had a far more complicated modification: The Merlin engines were replaced by Bristol Hercules XVI 14-cylinder air-cooled radials. The demand for the Merlin outstripped production, and the Hercules was an available alternative. The Hercules was also more powerful, with an useful increase in the performance of the Halifax B Mk.III. Longer-span wings were fitted. As far as Bomber Command was concerned, the Mk.II and Mk.V were now obsolete for the long missions over Germany. The final wartime mark was the VI, fitted with 1800hp Hercules 100 engines and larger fuel tanks. The Mk.VII was nothing but a Mk.VI fitted with the Hercules XVI, again because of a shortage of engines. 6.178 Halifaxes were built, including some post-war special transport models.

The Halifax was more troublesome than the Lancaster, perhaps also because it was the pioneer in many ways, and the Lancaster had better performance. The Lancaster became the main bomber of the command, and dropped nearly three times as many bombs as the Halifax; although the latter still had a larger share than all other bombers in the Command combined. Halifaxes flew 75.532 missions and dropped 227.610 tons of bombs.

The Halifaxes as U-boat hunters 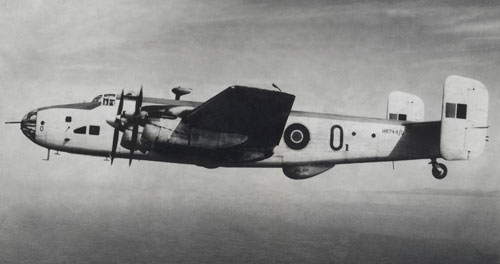 A very nice capture of a RAF Coastal Command Halifax in flight. This one is from 58 Squadron RAF.
Probably taken in 1943 while the squadron was stationed at St. Eval.

It was obvious that the four-engined long-range bombers could be very useful to Coastal Command, but Bomber Command was very reluctant to release even a few aircraft. It always argued that the bombers combatted the German U-boats more effectively if they were used for attacks on the German production base and the U-boat pens. When Bomber Command was eventually forced to release some of its four-engined bombers to other branches of the RAF, it preferred to release Halifaxes rather than Lancasters. Hence the Halifax also served as maritime patrol aircraft, meteorological reconnaissance aircraft, glider tug, and transport. Bomber Command was especially anxious to get rid of the Halifax Mk.V with its brittle undercarriage legs.

But initially, Bomber Command only loaned units, and the Halifaxes of No.405 (RCAF) and No.158 Squadron flew U-boat patrols on behalf of Coastal Command. After exerting much pressure, Coastal Command acquired its own aircraft, and could equip squadrons 58 and 502 with the Halifax GR Mk.II. These modified B Mk.IIs were equipped with ASV Mk.III radar, and a fixed forward-firing .50 gun to suppress the Flak guns of an U-boat. The Halifaxes considerably hindered U-boat activities by forcing them to dive, but actual sinkings were rare. For example, No.58 sighted 15 U-boats in May 1943 alone and made 13 attacks; but it was credited with sinking three German and one Italian submarine during the year. In 1944 the Halifaxes increasingly flew night patrols.

Coastal Command received the GR Mk.II from November 1942 onwards, the GR MK.V from January of the next year, the Hercules-engined GR Mk.III in January 1944, and from June 1945 also the GR Mk.VI. Coastal Command aircraft could easily be distinguished from the bombers: All but the top surfaces were painted white, while in Bomber Command they were black. Armament could consist of up to eight 250lb depth charges, but in 1944 600lb anti-submarine bombs were introduced. A GR.VI flew the last mission of the Halifax, in March 1952.