Light cruiser of the Ceres class

The sinking of HMS Courageous. 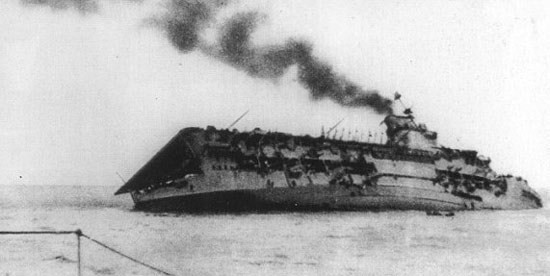 HMS Courageous sinking as seen from one of the escorting destroyers.

At 1445 hours, the group picked up a distress call from the British merchant Kafiristan that was being attacked by the German submarine U-53 about 350 miles west of Cape Clear. The destroyers HMS Inglefield and HMS Intrepid were detached and the carrier launched four Swordfish aircraft, one of them forced the U-boat to dive without damaging it at 1700 hours.

At about 1800 hours, another U-boat, U-29, spotted the carrier group and began chasing it, but had no chance to get into a favorable attack position until the carrier turned into the wind to recover the four Swordfish returning from the search for U-53. She was now heading on a straight course at 18 knots towards the U-boat which attacked only five minutes after the last aircraft landed. At 1950 hours, U-29 fired a spread of three G7e torpedoes at HMS Courageous and hit her with two of them on the port side abaft the bridge. She almost immediately took a heavy list to port and sank after 17 minutes about 190 miles southwest of Dursey Head, Ireland.

The Commanding Officer, 17 other officers and 501 ratings were lost, including 36 RAF service crewmen. All Swordfish aircraft of 811 and 822 Sqdn FAA were lost with the ship.

While HMS Ivanhoe attacked U-29 with depth charges, HMS Impulsive began to rescue the survivors and was soon joined by the American merchant Collingsworth, the British merchant Dido and the Dutch passenger ship Veendam, which launched 14 lifeboats and also saved the ships log. The rescue work proved difficult due to the heavily oiled sea. Further help arrived when HMS Kempenfelt (Capt. C. Caslon, RN) and HMS Echo (Cdr. S.H.K. Spurgeon, RAN) joined HMS Ivanhoe in the submarine hunt together with the by now returned HMS Intrepid, but the U-boat escaped during the night. Also two light cruisers, HMS Caradoc (Capt. E.W.L. Longley-Cook, RN) and HMS Ceres (Capt. E.G. Abbott, AM, RN) arrived at the scene together with the destroyer HMS Kelly (Capt. L.F.A.V.N. Mountbatten, GCVO, RN), but the cruisers were soon ordered away.

The merchant Dido had picked up 23 officers and 195 ratings and was escorted to Liverpool by HMS Intrepid. The survivors rescued by the neutral merchants were transferred to HMS Inglefield and HMS Kelly and arrived at Devonport (Plymouth) on the afternoon of 19 September.

After this loss and the unsuccessful attack of U-39 on HMS Ark Royal (Capt. A.J. Power, RN) only three days earlier, carriers were withdrawn from such patrols as they were considered to be to valuable.

Just after 1500 hours on 23 November the British armed merchant cruiser HMS Rawalpindi (Capt.(Retd.) E.C. Kennedy, RN) sighted the Scharnhorst. Rawalpindi was part of the British Northern Patrol and was stationed south-east of Iceland in the Iceland-Faroe gap. Captain Kennedy at first tried to outrun the German ship, to report to the Admiralty that he sighted the German pocket battleship Deutschland, still believed to be operating in the North Atlantic, and to buy time so that other ships of the Northern patrol could come to his assistance. Just after 1600 hours, Rawalpindi came within range of the Scharnhorst and was quickly reduced to a flaming wreck. During this engagement Scharnhorst was hit by a 6in shell from Rawalpindi causing only light damage. Scharnhorst and Gneisenau together picked up 27 survivors from the Rawalpindi which finally sank around 2000 hours.

Of the ships of the Denmark strait patrol, the heavy cruisers HMS Suffolk (Capt. J.W. Durnford, RN) and HMS Norfolk (Capt. A.G.B. Wilson, MVO, DSO, RN) were ordered to proceed to the Bill Bailey Bank (to the south-west of the Faroe Islands).

The destroyers HMS Tartar (Lt.Cdr. D.E. Holland-Martin, RN), HMS Kandahar (Cdr. W.G.A. Robson, RN) and HMS Kashmir (Cdr. H.A. King, RN) departed Scapa Flow with orders to locate and shadow the German ships. HMS Tartar however had to return to Scapa Flow the next day due to a damaged rudder.

Nothing happened and the convoy arrived safely in the Clyde on 17 December 1939. (2)

The convoy assembled in the Clyde area on 15 August 1941.

On 31 October 1941 the convoy, now made up of Ellenga, Glaucus, Johan de Witt, Largs Bay, Nieuw Zeeland Orion and Rangitiki (16698 GRT, built 1929) departed Colombo for Singapore. The convoy was escorted by the light cruiser HMS Mauritius (Capt. W.D. Stephens, RN). They arrived at Singapore on 6 November 1941. (4)

21 Dec 1941
In the morning, the US transport Orizaba (6937 GRT, built 1918) parted company with convoy WS 12X and set course for Mombasa. She was escorted by the British light cruiser HMS Ceres (Lt.Cdr.(Retd.) H.W.V. Stephenson, RN) which had made rendez-vous with convoy WS 12X and its escort, the British light cruiser HMS Dorsetshire (Capt. A.W.S. Agar, VC, DSO, RN). (5)