River gunboat of the Insect class 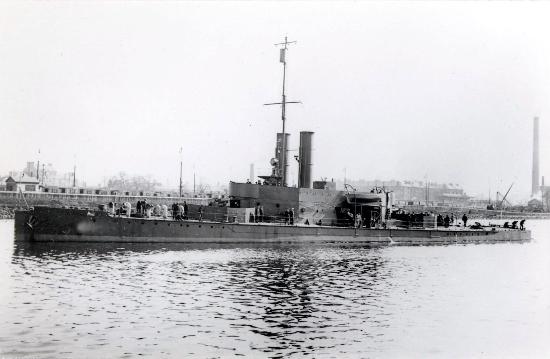 At 1800/17 the monitor HMS Terror (Cdr. H.J. Haynes, DSC, RN) and the gunboat HMS Aphis (Lt.Cdr.(Retd.) J.O. Campbell, DSC, RN) departed Alexandria for Operation IS 1. The object was to bombard enemy positions off Mersa-el-Sahal in the Tobruk area during the nights of 18/19 and 19/20 January to aid the British Army in their attempt to capture Tobruk from the Italians.

At 0400/18, a force made up of the light cruisers HMS Orion (Capt. G.R.B. Back, RN, flying the flag of Vice-Admiral H.D. Pridham-Whippell, CB, CVO, RN),HMS Bonaventure (Capt. H.G. Egerton, RN) and the destroyers HMS Jervis (Capt. P.J. Mack, DSO, RN), HMS Nubian (Cdr. R.W. Ravenhill, RN) and HMS Hero (Cdr. H.W. Biggs, DSO, RN) departed Alexandria. They were to cover the operations off Tobruk. The cruisers were to patrol to the north-west while the destroyers were to patrol off the north-east.

The weather however became bad and the operation had to be postponed for 24 hours. The cover forces however remained in their positions as it was thought possible that the old Italian armoured cruiser San Giorgio might try to escape from Tobruk. In the end the cover force was withdrawn for more urgent operations and was ordered to proceed to Suda Bay where they arrived in the afternoon of the 20th. Due to this bad weather the shallow draft HMS Aphis got into trouble as she was unable to seek shelter. Two destroyers and an aircraft were sent out for assistance. She was found at 1300/19 off Damietta. HMS Griffin then accompanied her to Port Said where she arrived at 0700/20. She had to be docked there for repairs to her hull.

The weather however remained bad and it was not possible to bombard during the night of 19/20 January as well. Also HMS Terror sustained weather damage but was able remain at sea.

During the night of 20/21 January, HMS Terror assisted by HMS Gnat (Lt.Cdr. S.R.H. Davenport, RN) and HMS Ladybird (Cdr.(Retd.) J.F. Blackburn, RN) from the Inshore Squadron did manage to carry out her bombardment duties. Little enemy opposition was experienced.

Also the destroyers HMAS Stuart (Capt. H.M.L. Waller, DSO, RAN), HMAS Vampire (Cdr. J.A. Walsh, RAN) and HMAS Voyager (Cdr. J.C. Morrow, DSO, RAN) were on patrol to the west of Tobruk to cut the enemy sea communications. During the night of 21/22 January, HMAS Vampire sank the Italian schooner Diego west of Tobruk. The crew of ten were taken prisoner. On the 22nd HMAS Voyager returned to Alexandria due to defects. She was relieved the next day by HMS Defender (Lt.Cdr. G.L. Farnfield, RN).

HMS Terror and HMS Gnat also returned to on the 22nd. HMS Terror had lost her mast and sustained some additional damage in the recent heavy weather. HMS Gnat had to clean her boilers. The destroyers remained on the inshore patrol for now. (2)

The cruisers returned to Alexandria at 1330/21. At 0610/21 the destroyers had been detached to go to the assistance of the gunboat HMS Gnat (Lt.Cdr. S.R.H. Davenport, RN) which had been torpedoed and heavily damaged. Due to the air threat they remained near Mersa Matruh and were not allowed to proceed further to the west. HMS Griffin and HMS Jaguar were later joined by the escort destroyers HMS Avon Vale (Lt.Cdr. P.A.R. Withers, DSO, RN) and HMS Eridge (Lt.Cdr. W.F.N. Gregory-Smith, RN).

Tow was later passed to the tug HMS St. Monance.