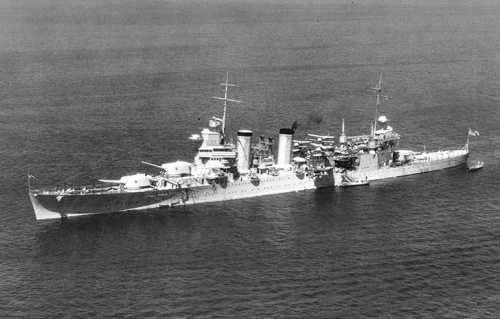 13 Nov 1942
USS San Francisco took part in point-blank range night First Battle of Guadalcanal. She participated in damaging Japanese battleship Hiei and also hit USS Atlanta several times ("friendly fire"). San Francisco took heavy damage during this battle. She received 45 shells (14 in., 6 in., 5,5 in. and 5 in. calibres) and numerous splinter hits. No damage was taken below the water line, however some of the compartments were flooded. One of the splinters hit the magazine sprinkling switchboard causing short circuit and in consequence complete flooding of 8 in. turret II magazines and handling room. Several other rooms (including one of 5 in. ammunition magazines) were partially flooded due to splashing water pouring through holes made by shells. Electric circuits were seriously damaged - severed in many places which caused cutting power to forward and after superstructure. Control of the ship was few times lost and regained again. Electrical control of the 8 in. turret II was rendered inoperative by flooding of magazines. However, power generators remained intact. Starboard and port side secondary batteries (5 in.) were put out of commission almost entirely. Guns No. 3, 4 and 5 were hit by shells. Guns No. 1, 2, 6 and 7 became inoperable due to heavy casualties of their crews (caused by fragments). Only No. 8 remained operational (odd numbers refer to starboard even to port side cannons). 22 separate fires were started, but all of them were quickly extinguished by the crew. Machinery of the ship remained intact, however some of the ventilators were damaged, which caused considerable heat in the after engine room. It was kept in operation by frequent changes of the watch and brief inspections of gauges. All exterior communication measures were put out of commission (radio, lights, signal flags). Compasses were also destroyed. Crew suffered 189 casualties (77 KIA, 105 WIA, 7 MIA). Among the dead were Rear Admiral Callaghan, his staff and Captain Young. Damage control officer Lieutnant Commander Herbert Emery Schonland assumed command as senior surviving officer while the injured communication officer Lieutenant Commander Bruce McCandless conned the ship. The former ordered the latter to continue the conning while Schonland himself resumed the work of maintaining the stability of the ship and conducting repairs. McCandless continued engaging the enemy and successfully retreated from battle. Both of them (and Rear Admiral Callaghan) were awarded Congressional Medal of Honor. Main source: U. S. S. San Francisco gunfire damage. Battle of Guadalcanal November 13, 1942 National Archives & Records Administration, Pacific Region, San Francisco Record Group 181, Pearl Harbor Navy Yard General Correspondence Files, 1941-45 Declass NDD 868129. (1)

12 Feb 1944
Task Force 58 departed Majuro Atoll for operation HAILSTONE, a raid against the Japanese base at Truk Atoll.

Task Force 58 was made up of the following ships;