Heavy cruiser of the Portland class 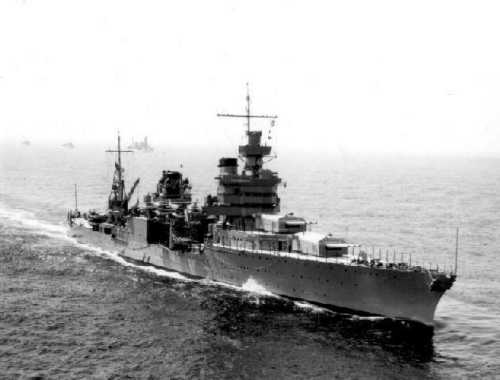 Feb 1933
USS Portland, first of a class of two 9800-ton heavy cruisers, was built at Quincy, Massachusetts. Commissioned in February 1933, she took part in the search for survivors of the crashed airship Akron in April of that year. During the rest of the 1930s, Portland operated with the U.S. Fleet in the Pacific and Caribbean areas, with occasional special assignments that took her elsewhere. In October 1935, she escorted USS Houston (CA-30), with President Roosevelt on board, on a voyage from San Diego, California, through the Panama Canal to Charleston, South Carolina. She first crossed the Equator during Fleet manoeuvres in May 1936. (2)

13 Nov 1942
During the First Battle of Guadalcanal she was hit by a "Long Lance" torpedo. Explosion caused rudder damage. USS Portland was able only to circulate, but survived this battle and even managed to do some damage to the Japanese battlecrusier Hiei. (2)