Aircraft Carrier of the Implacable class 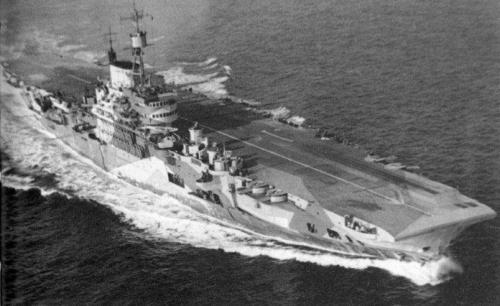 On the morning of 4 January 1945, carrier aircraft were flown off to attack the oil refineries at Pangkalan Brandan and successfully completed the operation. Photographic reconnaissance was also made of port installations at Belawan Deli, Brandan, and Soesoe.

In the afternoon of 6 January 1945, HMS Indifatigable, HMS Sussex, HMS Kempenfelt, HMS Wakeful and HMS Uriana parted company with the remainder of the Force. These ships were to proceed to Colombo.

All ships from the force arrived at Trincomalee / Colombo on 7 January 1945. (3)

HMS Wessex apparently sailed from Trincomalee on the 17th and joined the Force at sea on the 19th.

On 20 January ships from ' Force 63 ' were refuelled by ' Force 69 '. Due to the weather conditions this was done only with difficulty and some of the refuelling gear of the tankers was damaged. HMS Ceylon was now assigned to ' Force 69 ' to give protection to this Force. [Note: Arndale at this moment was not yet with ' Force 69 '.]

' Force 63 ' then proceeded on the first phase of the operation, to launch air strikes on the oil installations at Pladjoe (north of Palembang) which were to be flown off on 21 January but the weather prevented this. It was only at 24 January that the weather had cleared to enable flying operations. 43 Avengers, 12 Firefly's (equipped with rockets) and 50 Hellcat, Corsair and Seafire fighters were flown off. The enemy installations were damaged but at the cost of no less then 32 aircraft due to enemy action (7) or crash landings (25). 14 enemy fighters were reported shot down in the air and 38 aircraft were reported to have been destroyed on the gound.

' Force 63 ' then proceeded to the launch position for the second phase of operation during which air attacks were to be made on oil installations at Soengi-Gerong (also near Palembang). 48 Avenger, 10 Fireflies, 24 Corsairs and 16 Hellcats were launched. During dogfight 30 Japanese aircraft were shot down and another 38 were reported as having been destroyed on the ground. 16 aircraft did not return to the carriers.

A Japanese counter attack with 12 bombers failed. All were shot down by fighters from the Combat Air Patrol or AA fire from the ships.

' Force 69 ', minus Arndale and Wave King returned to Trincomalee on 6 February 1945. The other two tankers went to Australia. HMS Ceylon had parted company with ' Force 69 ' on 4 February and arrived at Trincomalee on 5 February.