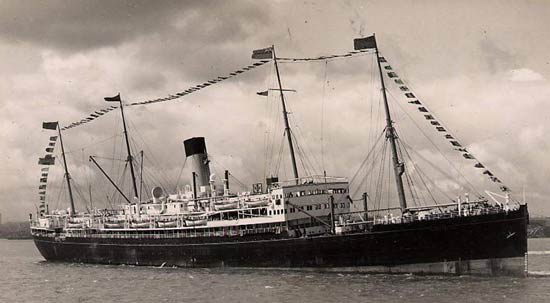 This convoy departed Liverpool and the Clyde on 7 October 1940. The convoy arrived at Suez on 16 November 1940.

It was escorted by the destroyers HMS Douglas (Cdr.(Retd.) J.G. Crossley, RN) and HMCS St. Laurent (Lt. H.S. Rayner, RCN). HMCS St. Laurent however collided with a small merchant vessel very early on the 8th and had to return to Liverpool for repairs.

At 1012/8, a large enemy bomber was seen to approach the Capetown Castle off the Clyde section and dropped a bomb which missed.

At 1050/8, HMCS Ottawa and HMS Active were ordered to close the Oronsay which had been damaged by air attack and needed assistance. HMS Active however misunderstood the order and remained with the convoy. Meanwhile the Oronsay had dropped out of the convoy.

At 1440/8, Oronsay got underway at slow speed and was able to increase speed to 9 knots.

At 1520/8, the ships that were with the Oronsay sighted the Liverpool section of the convoy which apparently had been delayed by bad weather conditions and therefore unable to have joined up with the Clyde section as had been intended. HMS Douglas, one of the escorting destroyers of the Liverpool section had been unable to keep up with it due to the weather conditions now joined the Oronsay group.

At 0205/9, HMS Arrow and HMCS Ottawa parted company with Oromsay and the other escorts to proceed to Londonderry.

Meanwhile the Clyde section had continued on escorted by HMS Whitehall, HMS Achates and HMS Active. As did the Liverpool section but apparently unescorted. They had failed to make rendezvous with each other in the heavy weather.

Around 1215/9, the Clyde section was joined by the light cruiser HMS Kenya (Capt. M.M. Denny, CB, RN). It seems that at this time the destroyers were no longer present.

At noon on the 12th the Clyde section, with HMS Kenya was finally joined by the Liverpool section of the convoy.

The convoy arrived at Freetown in the afternoon of October 18th.

The convoy departed Freetown on 20 October 1940 and was made up of the Capetown Castle, Duchess of York, Georgic, Monarch of Bermuda, Orontes and Winchester Castle.

The convoy arrived at Capetown on 28 October 1940. HMS Dorsetshire then proceeded to Simonstown where she arrived also on the same day.

On 30 October the convoy, now made up of the Duchess of York, Georgic, Monarch of Bermuda and Orontes departed Capetown for Suez. They were escorted by HMS Dorsetshire.

Shortly before noon the Erinpura and Khedive Ismael split off from the convoy and set course for Mombasa escorted by HMS Carthage. HMS Dorsetshire continued on with the remainder of the convoy towards Suez.

In the morning of November 11th, the light cruiser HMS Caledon (Capt. C.P. Clarke, RN) joined the convoy at the entrance to the Gulf of Aden.

The troopships Duchess of York and Georgic also re-joined the convoy after a brief visit to Aden. HMS Caledon also briefly left the convoy to oil at Aden before re-joining it.

HMS Dorsetshire parted company with the convoy at 0915/14.