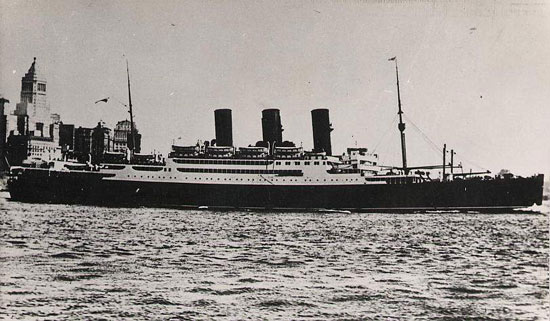 21 Oct 1939
At 1406Z/21, the armed merchant cruiser HMS Scotstoun (Capt. S.K. Smyth, RN), which was on patrol in the Denmark Strait, sighted a merchant vessel which was identified as the Danish Virginia (4088 GRT, built 1920). It was at that time not possible to board the vessel due to the weather conditions.

As the vessel was thought to be suspecious HMS Scotstoun remained in company with the vessel and at 1030Z/22, she was ordered to raise colours. She complied at 1100Z/22 when the German ensign was hoised. It was then found out that the merchant vessel was in fact the German Poseidon (5864 GRT, built 1922).

Around 1300Z/22, a boarding party was sent over. The sea boat returned with the German Captain which then informed Captain Smyth that he had just scuttled his ship and that she was sinking. At 1330Z/22, the Germans abandoned ship and rowed towards HMS Scotstoun.

The Germans were picked up which was completed around 1430Z/22.

At 1535Z/22, a boarding party was sent over. She was alongside the German ship at 1600Z/22. The boarding officer reported that she was not sinking. It was intended to take the ship to Kirkwall with the boarding party.

At 0630Z/22, the boarding party weighted anchor as they had got the ships engines working.

At 0750Z/23, HMS Scotstoun lost sight of the Poseidon in a snow storm and it she was only found later by the armed merchant cruiser HMS Transylvania (Capt. F.N. Miles, OBE, RN) which took her in tow towards Reykjavik.

The German ship finally sank on the 26th (or 27th) [sources differ, and there is no log available of HMS Transylvania.]

21 Nov 1939
The German merchant Tenerife (4996 GRT) is intercepted of the south coast of Iceland in position 62°55'N, 20°00'W by the British armed merchant cruiser HMS Transylvania (Capt. F.N. Miles, OBE, RN). However before the German ship can be captured she is scuttled by her own crew.

28 Mar 1940
HMS Transylvania (Capt. F.N. Miles, OBE, RN) intercepts the German merchant Mimi Horn (4007 GRT) in the Denmark Strait. However before the German ship can be captured she is scuttled by her own crew.