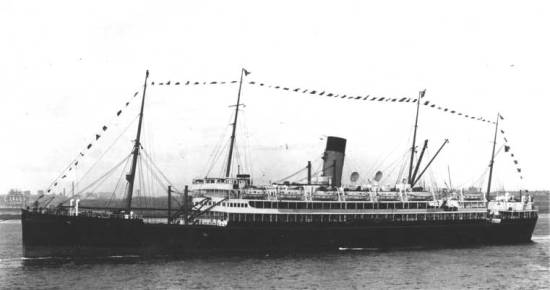 Hunt for the German pocket battleship Admiral Scheer after the attack on convoy HX 84.

In response to the attack on convoy HX 84 by the German pocket battleship Admiral Scheer the Admiralty acted quickly.

At 1050/6 the force split up; HMS Hood, HMS Naiad, HMS Phoebe, HMS Somali, HMS Eskimo and HMS Punjabi proceeded to patrol off the Bay of Biscay to cover the approaches to Brest and Lorient.

Shortly before midnight during the night of 6/7 November HMS Rodney was detached to escort to escort convoy HX 83 and once this convoy was safe, HX 85 from Halifax.

Three armed merchant cruisers, which were on patrol were recalled to port on the 8th. These were HMS Chitral (Capt.(Retd.) G. Hamilton, RN), which was to the northwest of Iceland and HMS California (Capt. C.J. Pope, RAN) and HMS Worcestershire (A/Capt. J. Creswell, RN), which were to the south of Iceland. The light cruiser HMS Southampton was ordered to take over the place of HMS Chitral. She split off from HMS Nelson at 1600/8. HMS Worcestershire joined HMS Nelson and her escorting destroyers around 1500/9.

There were also the destroyers HMS Churchill (Cdr.(Retd.) G.R. Cousins, RN), HMS Lewes (Lt.Cdr. J.N.K. Knight, RN), HMS Lincoln (Cdr. A.M. Sheffield, RN) and HMS Ludlow (Cdr. G.B. Sayer, RN). They were en-route to the U.K. and had departed Halifax on 31 October and refuelled at St. Johns on 3 November. After receiving distress signals from ships in convoy HX 84 they rushed to the reported location. The only thing they found was an empty lifeboat. They then continued their Atlantic crossing and arrived at Londonderry on 9 November.

The destroyer HMS Stanley (A/Lt.Cdr. R.B. Stannard, VC, RNR) had departed Halifax on 1 November and St. Johns on 5 November. Now she and the Canadian destroyer HMCS St.Francis (Lt.Cdr. H.F. Pullen, RCN) escorted convoy HX 85, which had been recalled, back to Nova Scotia.

On 8 November, after machinery defects had been repaired, the heavy cruiser HMAS Australia (Capt. R.R. Stewart, RN) departed the Clyde to protect convoys.

On 11 November, HMAS Australia relieved Renown from covering convoy HG 46 and Renown arrived back at Gibraltar around 1515/12. Renown had been joined at 0807/12 by the destroyers HMS Duncan (Cdr. A.D.B. James, RN) and HMS Forester.

Battlecruiser HMS Repulse escorted by the destroyers HMS Matabele and HMS Electra arrived at Scapa Flow for refuelling around 1100/11.

Battlecruiser HMS Hood, light cruisers HMS Naiad, HMS Phoebe and the destroyers HMS Somali, HMS Eskimo and HMS Punjabi returned to Scapa Flow around 1400/11 for refuelling. HMS Eskimo had suffered weather damage to her asdic dome and had some forecastle deck plates buckled. She was docked for repairs in the floating drydock at Scapa Flow from 13 to 16 November.

HMS Bonaventure returned to Scapa Flow on the 19th with weather damage.

HMS Repulse, HMS Naiad departed Scapa Flow around 1330/12 for patrol and also to provide cover for ships of the Northern Patrol. They were escorted by the destoyers HMS Sikh (Cdr. G.H. Stokes, RN), HMS Mashona, HMS Matabele and HMS Punjabi.

HMS Naiad parted company on the 13th to proceed to Jan Mayen Island where a German weather / wireless station in Jameson Bay was to be raided.

HMS Repulse returned to Scapa Flow at 0015/19 being escorted by the destroyers HMS Ashanti (Cdr. W.G. Davis, RN), HMS Mashona and HMS Matabele. They had provided cover for HMS Naiad during her raid on Jan Mayen Island.

Battleship HMS Rodney arrived at Scapa Flow around 1500/23rd. She had been joined at dawn the previous day by the destroyers HMS Beagle, HMS Brilliant, HMS Bulldog and HMS Electra. (1)

Earlier this day the German heavy cruiser Admiral Hipper had attacked troop convoy WS 5A and the Admiralty decided to sent out a cover force for these North Atlantic convoys in case the Admiral Hipper would proceed northwards in case she was going to return to Germany.

On the 27th, HMS Nigeria was detached to patrol off Iceland.

On the 28th HMS Repulse and her escorting destroyers met the armed merchant cruiser HMS Worcestershire (A/Capt. J. Creswell, RN) which had been the ocean escort of convoy HX 97. She reported the convoy had been scattered in heavy weather and that she was no longer in touch with the convoy.

On the 29th HMS Worcestershire was detached to Minches escorted by HMS Eskimo.

HMS Repulse and the other destroyers returned to Scapa Flow around 0600/31.

This convoy assembled in the Clyde area on 2 August 1941 destined for the middle east area.

On 6 August, around 2300 hours, HMS Worcestershire, HMS Broadway, HMS Gurkha, HMS Lance, HMS Legion, HrMs Isaac Sweers and ORP Piorun parted company with the convoy. Shorty afterwards the troopships Warwick Castle and Windsor Castle collided. Due to this the Warwick Castle was detached and was escorted to Halifax, Nova Scotia by HMS Worcestershire. Windsor Castle dropped astern and was brought back to the convoy the next day by HMS Jupiter who had been despached to search for her.Jupiter

Very early on the 9th HMS Jupiter was detached to fuel at Ponta Delgada, Azores. HMS Jupiter re-joined the convoy around 0700 on the 10th.

Around noon on 10 August, HMS London, was relieved by the light cruiser HMS Edinburgh (Capt. H.W. Faulkner, RN) which had departed Gibraltar on the 8th. HMS Edinburgh remained with the convoy until it reached Freetown on the 17th.

The light cruiser HMS Hawkins (Capt. H.P.K. Oram, RN) then took over the remainer of the convoy and took these towards Durban were they arrived on 5 September 1941. These were the troopships Andes, Cameronia, Highland Monarch, Nea Hellas, Rangitiki and the transports Diomed, Indian Price and Manchester Port.

On 6 September 1941 the part of the convoy (minus Reina del Pacifico) that had entered Capetown on 2 September departed from Capetown escorted by the armed merchant cruiser HMS Carnarvon Castle (Capt.(Retd.) H.N.M. Hardy, DSO, RN). On 8 September the Britannic split off and proceeded to Durban to embark troops that had been on the Cameronia. Britannic rejoined the next day escorted by Hawkins. The troop transport Aronda (9031 GRT, built 1941) was also with them and joined the convoy. After these ships had joined HMS Carnavon Castle then split off with the Indrapoera, Volendam, Nigerstroom and Phemius and took these ships to Durban.

The convoy (by now called WS 10B), now made up of the troopships Aronda, Britannic, Stirling Castle, Strathallan and Windsor Castle, and escorted by HMS Hawkins proceeded to Bombay where it arrived on 20 September 1941. En-route, in position 03.25’S, 51.12’E and on September 13th, HMS Hawkins had been relieved by the light cruiser HMS Emerald (Capt. F.C. Flynn, RN).

[Other ships that had been part of convoy WS 10 later proceeded to their destinations in other convoys.]

It departed Freetown on 6 July 1940 for Capetown / Durban.

On 24 June HMS Georgetown and HMS Salisbury were detached.

At 1620/27, HMS Vansittart parted company with the convoy to proceed to Ponta Delgada, Azores to fuel and to proceed to Gibraltar afterwards.

Between 0946 and 1023/28, HMS Brilliant fuelled from HMS Malaya. HMS Blackmore was fuelled by HMS Malaya late in the afternoon of the 28th.

At 0800/1, the destroyers HMS Boreas (Lt.Cdr. E.L. Jones, DSC, RN) and HMS Wivern (Cdr. M.D.C. Meyrick, RN) joined the convoy. The were to have joined the day before but were unable to find the convoy due to the bad visibility and the convoy, poor fixes and the convoy being a bit ahead of shedule. HMS Vimy parted company with the convoy shortly after these two destroyer had joined.

The convoy arrived safely at Freetown on 2 July 1942.

On departure from Freetown on 6 July the convoy, in the same composition as in which it had arrived, was escorted by HMS Malaya, HMS Brilliant, HMS Velox, HMS Wivern and HMS Blackmore.

At 1130/7, the troopship Batory parted company with the convoyto proceed to Takoradi escorted by HMS Blackmore. They arrived at Takoradi on 11 July. HMS Blackmore then departed Takoradi, after fuelling, later the same day to rejoin convoy WS 20.

At 1845/8, HMS Wivern was detached to fuel at Pointe Noire to fuel, then proceed to Walvis Bay to fuel there and then rejoin convoy WS 20.

At 0650/9, HMS Brilliant was detached to fuel at Pointe Noire.

At 1815/9, HMS Boreas joined the convoy coming from Takoradi. HMS Velox was then detached to Lagos.

At 0705/17, HMS Brilliant and HMS Wivern were detached to Simonstown.

At 0800/17, heavy cruiser HMS Shropshire (Capt. J.T. Borrett, OBE, RN) joined the convoy to take care of the Durban section. The Capetown section then split off escorted by HMS Malaya and HMS Blackmore. The Capetown section arrived at Capetown later the same day. It was made up of the troopships / transports; Abosso, Adrastus, Banfora, Bergensfjord, Cuba, Duchess of Richmond, Empire Pride, Empress of Australia, Esperance Bay, Leopoldville and Palma.

At 0830/18 (GMT), HMS Brilliant and HMS Wivern departed Simonstown to join the Durban section of the convoy that was being escorted by HMS Shropshire.

The Durban section arrived at Durban in the moning of July, 20th. HMS Shropshire parted company to proceed to Simonstown. HMS Brilliant and HMS Wivern then patrolled off Durban until the last ships of the convoy had entered the harbour. The Durban section had been made up of the troopships / transports; Arundel Castle, Awatea, Durban Castle, Empress of Russia, Nigerstroom, Orion, Stratheden and Strathmore.

In the morning of 21 July 1941 the troopships / transports Abosso, Adrastus, Bergensfjord, Cuba, Duchess of Richmond, Empire Pride, Empress of Australia, Leopoldville and Palma departed Capetown to the rendez-vous point near Durban. They were escorted by the escort destroyer HMS Blackmore. Around 1600/21 they were joined by the battleship HMS Malaya which had departed Simonstown at 1215/21.

Around 0930/26 the convoy arrived off Durban where it merged with the Durban section.

The Durban section was made up of the troopships / transports; Arundel Castle, Orion, Stirling Castle and Stratheden. They wer escorted by the light cruiser HMS Gambia (Capt. M.J. Mansergh, CBE, RN) and the destroyers HMS Brilliant and HMS Wivern.

HMS Malaya split off from the Capetown section to proceed to Capetown escorted by HMS Brilliant and HMS Wivern. HMS Blackmore entered Durban.

The convoy was now made up of the troopships / transports; Abosso, Adrastus, Arundel Castle, Bergensfjord, Cuba, Duchess of Richmond, Empire Pride, Empress of Australia, Leopoldville, Orion, Palma, Stirling Castle and Stratheden and was being escorted by HMS Gambia.

At 0900/30, the convoy, now to the east of Madagascar, was joined by the heavy cruiser HMS Frobisher (Capt. J.F.W. Mudford, RN) and the armed merchant cruiser HMS Worcestershire (A/Capt.(Retd.) E.H. Hopkinson, RN). The troopship Stirling Castle then split off to proceed to Mauritius escorted by HMS Gambia.

At 1410/31, HMS Worcestershire parted company with the convoy. Her speed had proven to be be to low and she had difficulty keeping up.