What happened on
20 May?

Light cruiser of the Bellona class 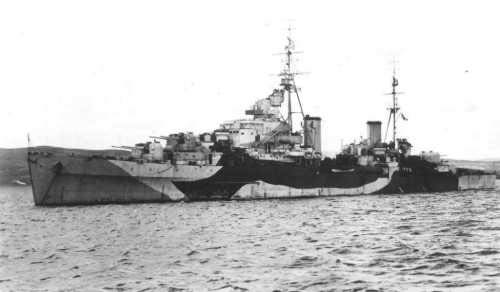 Later exercises were carried out with HMS Spartan (Capt. P.V. McLaughlin, RN). These included night exercises during the night of 31 August / 1 September. (5)

These were followed by gunnery exercises off Scapa flow.

She then too, left Scapa Flow and then HMS London and HMS Spartan conducted rangefinding and inclination exercises. These included night exercises and both cruisers returned to Scapa Flow early the following day. (7)

The armed merchant cruiser HMS Carthage (A/Capt. U.H.R. James, RN) was also part of the convoy. She was en-route from the East Indies station to the U.K. to be decommissioned and be outfitted for her new role as troop transport.

At 0620C/18, the Eastern Prince was detached to Alexandria.

The convoy arrived at Algiers on 22 September 1943.

On 28 September 1943 the convoy departed Algiers for the U.K.

The armed merchant cruiser HMS Carthage was still part of the convoy.

At 0900A/30, the Empress of Australia and Monarch of Bermuda were detached.

At 0420A/1, the Bergensfjord, Highland Princess and Volendam parted company to proceed to Freetown. They took HMS Wishart and HMS Witherington with them as escorts. Also the destroyer HMS Malcolm (Lt. I.M. Clegg, RN) joined them which had came from Casablanca.

At 1300A/1, the Athone Castle was detached to proceed independently to New York.

At 0635Z/5, HMS Spartan parted company with the convoy.

At 0930Z/5, HMS Charybdis and HMS Albatross parted company to proceed to Plymouth where they arrived on 6 October.

On 7 October the convoy arrived in U.K waters. The bulk of the convoy proceeded either to Greenock or to Liverpool.