Light cruiser of the Minotaur class 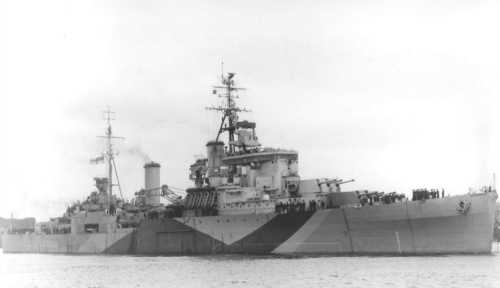 Attacks by ships and aircraft from the British Pacific Fleet on Truk..

On board HMS Implacable were 48 Seafire fighters, 21 Avenger torpedo bombers and 11 Firefly fighters making a total of no less then 80 aircraft. On board HMS Ruler there was only one Walrus aircraft for air/sea rescue duties.

At 0535K/14, HMS Implacable commenced flying operations. A combat air patrol to which eight Seafires had been assigned was maintained during the day. These aircraft were serviced by HMS Ruler so that Implacable could focus on offensive sorties against Truk.

Around 0545K/14, twelve Seafires and two Fireflies were launched to attack Moen Island. The Fireflies made a reconnaissance of the island while the Seafires attacked the airfield and the radar station. During the attack on the airfield a Seafire was shot down by the Japanese, it's pilot being killed. This was the only British aircraft lost due to enemy fire during the entire operation.

During the whole day strikes agains Truk atoll were carried out. The final attack was carried out by twelve Seafires in a dive-bomber role. They attacked fuel tanks on Moen Island but these were apparently empty.

Few worthwile targets had however been found during the attacks. All the air strikes had been escorted by Seafire fighters but no Japense aircraft at all were encountered in the air during the entire day.

In the morning, the Walrus that had been on board HMS Ruler was lost overboard due to the weather conditions.

During the night of 14/15 June, two Avengers patrolled over Moen Island to prevent the Japanese from putting the airfield back into operation. They were frequently fired upon but were not hit.

Further air attacks were carried out on the 15th. The included attacks on the floating dry dock. Also more oil storage tanks were attacked but it became apparent that Truk had ceased to operate as the large naval base it once was.

Late in the morning the cruisers bombarded the atoll during which they were aided by Seafires for spotting duties. HMS Swiftsure, escorted by HMS Teazer bombarded Moen Island. Fall of shot was however terrible and it was later found out that there had been a defect to the fire control table.

HMS Newfoundland, escorted by HMS Troubridge attacked coast defence batteries and the airfield on Et(t)en Island. Her fall of shot was considered good.

HMCS Uganda (with Rear-Admiral Brind temporary on board) and HMNZS Achilles bombarded a Japanese seaplane base at Dublon Island but they hardly did any damage and there were communition problems with the spotting Seafires. The cruisers had been escorted by HMS Tenacious.

During the action HMS Implacable and HMS Ruler had remained at sea only escorted by Terpsichore and HMS Termagent.

During the air operations five Avengers had been lost, all on taking off. One crew was killed, the others could be picked up by destroyers.

The force returned to Manus in the morning of the 17th. (3)