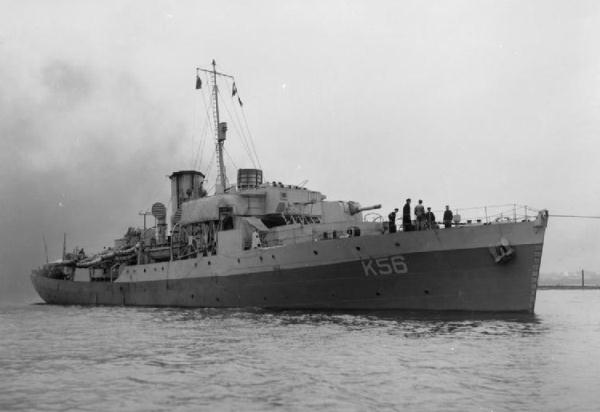 This convoy departed U.K. ports on 7 January 1941 for variuos ports in the Far East and Mediterranean (see below).

Four of these ships departed Avonmouth on 7 January and six sailed from Liverpool. These ships anchored in Moelfre Bay for several days as the eleven ships that were to be sailed from the Clyde could not do so due to thick fog.

The Avonmouth (Bristol Channel) section of the convoy had been escorted to Moelfre Bay by the destroyer HMS Vansittart (Lt.Cdr. R.L.S. Gaisford, RN).

The ships and their escorts anchored in Moelfre Bay from 8 to 11 January. The escorts remained there for A/S patrol and AA protection and were joined by the destroyer HMS Foresight (Lt.Cdr. G.T. Lambert, RN) which had departed Liverpool on the 8th and the light cruiser HMS Naiad (Capt. M.H.A. Kelsey, DSC, RN, flying the flag of Rear-Admiral E.L.S. King, CB, MVO, RN) which came from the Clyde.

When it became clear that the ships from the Clyde were finally able to sail the ships in Moelfre Bay sailed for Lough Foyle (near Londonderry, Northern Ireland) to take on board additional water.

The ships from Lough Foyle and the Clyde made rendez-vous at sea on 12 January and course was then set to Freetown.

The light cruiser HMS Emerald (Capt. F.C. Flynn, RN) departed Plymouth on 12 January. She joined the convoy around noon on the 15th. Shortly afterwards HMS Naiad then parted company with the convoy and proceeded to Scapa Flow where she arrrived around 1430/17.

HMS Phoebe and HMS Fearless also parted company with the convoy escorting the Capetown Castle and Monarch of Bermuda to Gibraltar where they arrived in the afternoon of the 18th. On the 17th they were joined by the destroyer HMS Forester (Lt.Cdr. E.B. Tancock, RN) and on the 18th by two more destroyers; HMS Duncan (A/Capt. A.D.B. James, RN) and HMS Fury (Lt.Cdr. T.C. Robinson, RN).

At Gibraltar the two troopships took on board troops from the damaged troopship Empire Trooper. They departed Gibraltar for Freetown on 19 January being escorted by the destroyers HMS Fury, HMS Fearless and HMS Duncan until 21 January when they parted company. Both troopships arrived at Freetown on 26 January escorted by HMS Faulknor (Capt. A.F. de Salis, RN) and HMS Forester.

Meanwhile convoy WS 5B had coninued its passage southwards.

On the 16 January all remaining destroyers parted company.

HMS Ramillies parted company with the convoy on 17 January.

The troopship / liner Duchess of York was apparently detached at some point.

The Capetown section departed that place on 12 February and the Durban section on 15 February after which a rendez-vous of Durban was effected.

On 21 February the troopships Empress of Australia, Empress of Japan, Ormonde and Windsor Castle were detached to Mombasa escorted by HMS Emerald. They arrived at Mombasa on 22 February. In the approaches to Mombasa the convoy was joined by the destroyer HMS Kandahar (Cdr. W.G.A. Robson, RN).

The remainder of the convoy continued on Suez escorted by HMS Australia and HMS Hawkins (Capt. H.P.K. Oram, RN) which joined the convoy shortly before HMS Emerald and the four troopships for Mombasa were detached, arriving on 3 March. The sloop HMAS Parramatta (Lt.Cdr. J.H. Walker, MVO, RAN) provided A/S escort during the passage through the Red Sea. The convoy arrived at Suez on 3 March 1941.

Convoy WS 5BX, now made up of the troopship Aquitania (British, 44786 GRT, built 1914) and Empress of Japan, departed Bombay for Singapore on 5 March escorted by HMS Enterprise. The convoy was joined on 8 March by the light cruiser HMS Durban (Capt. J.A.S. Eccles, RN). HMS Enterprise left the convoy on 9 March. The convoy arrived at Singapore on 11 March. HMS Durban had parted company with the convoy the day before.

At 1820N/14, HMS Milford, HMS Asphodel and HMS Calendula parted company with the convoy to return to Freetown.

HMS Sheffield parted company with the convoy in the afternoon of 1 March 1941 and returned to Gibraltar.

At 1300D/2, the light cruiser HMS Dido (Capt. H.W.U. McCall, RN) joined the convoy escort. HMS Bulolo then parted company with the convoy to proceed to the Clyde.

At 1800/4 the three A/S trawlers parted company with the convoy.

In the early morning hours of 8 March 1941 the convoy was attacked by the German submarines U-105 and U-124. Five ships of the convoy were sunk, these were the Harmodius, Hindpool, Lahore, Tielbank and Nardana.

At 1330/8 HMS Forester, which was well to the west of the convoy, briefly sighted the German battlecruisers Scharnhorst and Gneisenau steaming towards the convoy. The German ships were also sighted around the same time by HMS Malaya's Swordfish aircraft. Following the report of the sighting HMS Malaya and HMS Faulknor left the convoy to join HMS Forester to put themselves between the convoy and the enemy.

At 1730/11, HMS Asphodel parted company with the convoy with the tankers Beaconstreet and British Hope which she then escorted to Gibraltar.

At 1000/13, HMS Faulknor and HMS Foresight parted company with the convoy and set course for Gibraltar.

HMS Havelock and HMS Verity parted company with the convoy on 24 March as did HMS Veteran on the 25th.

The merchant vessel Empire Advocate (British, 5787 GRT, built 1913) joined at sea on 25 April near the Azores.

Ocean escort was provided by the light cruiser HMS Dragon (Capt. R.W. Shaw, MBE, RN) until being relieved around noon on the 19th by HMS Fiji (Capt. P.B.R.W. William-Powlett, RN) which then remained with the convoy until May 1st.

On 20 April the Armed Merchant Cruiser HMS Dunnottar Castle (Capt.(Retd.) C.T.A. Bunbury, RN) joined the convoy and she remained with it until May 11th.

On 26 May 1941, HMS Dorsetshire parted company with the convoy to join the pursuit of the German battleship Bismarck. She succeeded in making contact on the next day he delivered the coup de grace to her and torpedoed the heavily damaged German battleship from both sides and she sank soon afterwards. HMS Dorsetshire picked up German survivors until she was forced to leave the scene after a U-Boat alarm. More survivors had to be left in the water.

The convoy was joined by more escorts for the passage through the Western Approaces, these were; Destroyer HMS Reading (Lt.Cdr. D.V. Clift, RN) and the corvettes HMS Gentian (Lt.Cdr. R.O. Yeomans, RD, RNR), HMS Hibiscus (Lt. H. Roach, RNR), HMS Pimpernel (Lt. F.H. Thornton, RNR), HMS Rhododendron (Lt.Cdr. W.N.M. Faichney, DSO, RNR). These ships all joined on 30 May 1941 and remained with the convoy until it was dissolved on 4 June 1941. The destroyers HMS Vanquisher (Cdr. N.V. Dickinson, DSC, RN) and HMS Winchelsea (Lt.Cdr. W.A.F. Hawkins, DSC, RN) also joined on 30 May but left the convoy on 2 June 1941. Finally the corvette HMS Freesia (Lt.Cdr. T.P.G. Crick, RN) joined the convoy on 31 May and remained with it until dissolved on 4 June 1941.

The transport Anselm (British, 5954 GRT, built 1935) had been unable to keep the required speed up during the passage from Liverpool to the rendezvous point and was ordered to proceed to the Clyde. She was not allowed to join the convoy.

HMS Wolverine was detached with defects at 1324Z/31.

HMS Wells parted company with the convoy around 2200Z/1.

The convoy left Freetown in the same composition as in which it had arrived.

At 0515/27, HMS Galatea parted company with the convoy and proceeded to Simonstown to fuel.

HMS Galatea departed Simonstown at 1530/27 and rejoined the remaining ships of the convoy at 0900/28.

The remaining ships and HMS Galatea arrived at Durban on 30 July 1941.

On 3 August 1941 the Arundel Castle, Athlone Castle, Monarch of Bermuda and Oronsay departed Durban escorted by HMS Galatea. The Capetown and Durban section then merged and set course for Aden. Both escorts remained with the convoy until it was dispersed off Aden on 14 August 1941.