Heavy cruiser of the Suffren class 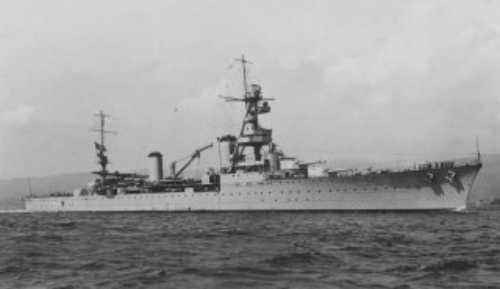 We don't have any commands listed for FR Suffren

An Allied force sailed on 20 June 1940 to carry out operation MD 3, the object was to destroy military objectives at Bardia and to destroy enemy submarines.

After this force had sailed, information was received from air reconnaissance that there were three enemy cruisers, three destroyers, two submarines and ten other ships over 40 feet long and eleven smaller vessels at Tobruk. It was therefore decided to provide cover for the destroyers of the A/S sweep. Another force left Alexandria at 1730/20 with orders to be in a position 40 nautical miles north of Tobruk at 0600/21 and if no enemy forces were encountered to return to Alexandria by 2000/21. This force was made up of the French cruisers Suffren (Capt. R.J.M. Dillard) and Duguay Trouin (Capt. J.M.C. Trolley de Prevaux). They were escorted by the British destroyers HMS Nubian (Cdr. R.W. Ravenhill), HMS Ilex (Lt.Cdr. P.L. Saumarez, DSC, RN) and HMS Imperial (Lt.Cdr. C.A.deW. Kitkat, RN).

The bombarding squadron arrived off the coast at 0500/21, a few minutes before sunrise. As he could not avoid the disadvantage of the dawn light, Vice-Admiral J.C. Tovey, CB, DSO, RN had decided to make the last 20 nautical miles or so of his approach at that time, and to attack while the sun was still low enough to dazzle the Italian gunners on the shore. The ships spread as their instructions prescribed, and stood to the south-westward towards Bardia in the order HMS Orion, Lorraine, HMS Neptune and HMAS Sydney with two destroyers on the outer bow of each wing ship, HMAS Stuart and HMS Decoy to port and HMS Dainty and HMS Hasty to starboard.

At 0548 hours, HMS Orion opened fire, followed immediately by the other big ships except HMAS Sydney, which joined in about five minutes later, by which time the squadron had altered course to 145 degrees. The destroyers also started firing after the turn. At 0610 hours the squadron withdrew to the north-westward.

HMS Orion started by ranging on the lighthouse on Point Bluff at about 13500 yards range, it stood close to the position of the Italian coast defence battery, and at that time was the ony object in the target area that could be seen clearly to the haze. After turning to the south-westerly course at 0550 hours, she fired on the battery position itself until it was clear that the battery was not replying. Then at 0600 hours, she shifted to her second target area, the Wadi Jefran. Shooting was difficult as communication with her spotter aircraft could not be established.

The Lorraine attacked various targets in the left half of the area assigned to HMS Neptune, the town of Bardia, with her 13.4” guns, and perhaps silenced an anti-aircraft battery in that area with her 5.5” guns.

HMS Neptune ranged on the barracks in the left half of the town. As soon as she began firing for effect, however, the smoke of the explosions prevented her aircraft from observing, so she fired a few salvoes blind, which, with the Lorraine’s fire in the same quarter, raised cloud of dust that hid all that part of the target area. Accordingly HMS Neptune shifted her fire right, by steps, to attack an anti-aircraft battery in the northern half of that area and on regaining communication with her spotter aircraft during this sweep, she fired seventeen 4-gun salvoes with its help and the battery ceased fire.

HMAS Sydney fired at one target throughout, the camp in the centre of her area, starting a fire in one corner and probably causing losses amongst troops that were seen to leave the camp during the shoot. Smoke and dust obscured the target, so that she only saw half her shell burst. An unfortunate attack by fighter aircraft from the R.A.F. drove the spotter aircraft for HMAS Sydney out of action after her second salvo.

As for the destroyers, HMAS Stuart and HMS Decoy, now ahead of the line fired into the area of HMS Neptune at the wireless masts and the barracks respectively from a range of about 12000 yards. Smoke and dust made spotting difficult, and HMS Decoy fired only four salvoes in consequence. On the other hand HMAS Stuart could distinguish her shell bursts from those of HMS Neptune and the ones from the Lorraine so she continued firing until the smoke at last made spotting impossible.

HMS Dainty and HMS Hasty were astern of HMAS Sydney. The former attacked a house near the artillery headquarters, and believed she set it on fire. She also fired at the wireless masts. The main range for her shoot was about 14000 yards. Like the other destroyers she found her fall of shot hard to distinguish from that of the bigger ships. HMS Hasty fired on the wireless station, probably the same building as one of targets of the Lorraine. HMS Hasty then shifted her fire to a party of troops coming from the camp in the area HMAS Sydney was firing on. She could not see her fall of shot when firing at these troops.

All ships returned to Alexandria later on the 21st.

The Commander-in-Chief, Mediterranean Fleet, called this bombardment ‘ a useful minor operation, in which the damage caused fully justified the ammunition expended ‘. So far as could be judged from air reconnaissance / photographs and from what the ships could see at the time, the squadron destroyed some ammunition and other storehouses in the Wadi Jefran, blew up an anti-aircraft battery’s ammunition dump, and damaged or set fire to barracks and other government buildings in and near the town.

The Italians did not reply to the fire, indeed the squadron could see no coast-defence guns in position. The only opposition came from anti-aircraft guns, which fired a few rounds at the spotting aircraft without effect. (3)

Bombardment of Augusta, Sicily and raid to the south of the Strait of Messina.

Sailing of the forces and the cancellation of the operation.

At 2153 hours a signal was received from the Admiralty ordering the cancellation of the operation due to the French armistice. Following this signal the sailing of Force D was cancelled. Force A returned to the harbour immediately. Forces B and C were ordered to return to harbour on the morning of the next day. Orders were also issued to the Vice-Admiral Malta to not sail a convoy to Alexandria as had been intended under the cover of the operation. (4)

22 Jul 1943
FFS Suffren picks up two survivors from the British merchant City of Canton which had been torpedoed and sunk by the German U-boat U-178 five days earlier northeast of Beira in position 13°52'S, 41°10'E.