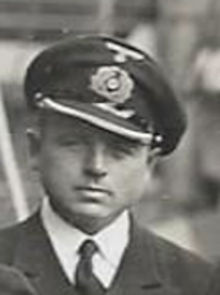 Dipl. Ing. (Msc in Engineering) Walter Dankleff joined the Kriegsmarine in 1935. He served with escort flotillas in the Baltic Sep 1940 - Jan 1943, for the last six months as Commander of the 2nd Sperrbrecher Flotilla. Sperrbrecher were former merchant ships fitted with anti-aircraft armament and loaded with cork and wood, making them almost unsinkable.

Dankleff joined the U-boat force in Jan 1943, and in July started U-boat Commander training with the 24th (Training) Flotilla. From Aug to Sept he attended U-boat construction familiarization (Baubelehrung) in preparation for his commissioning U-767 on 11 Sept 1943. Dankleff was, at 36, older than most U-boat commanders when he took command of U-767.

After working up exercises in the Baltic, the boat left Kiel for Norway on 9 May 1944. On 22 May 1944 U-767 left Marviken, Norway for the English Channel on her first and only patrol.

Oblt. Walter Dankleff and 48 of his men died when U-767 was sunk on 18 June 1944 in the English Channel SW of Guernsey in position 49.03N, 03.13W, by depth charges from the British destroyers HMS Fame, HMS Inconstant and HMS Havelock. There was one survivor (Niestlé, 1998).