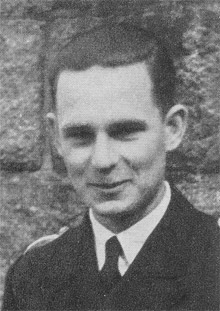 Erich Dobberstein joined the Kriegsmarine in 1938. He finished his U-boat training in July 1941. He was sent to an U-boat familiarization (Baubelehrung) programme at Bremen where the type IXC U-155 was being built. On 23 Aug 1941 Kptlt. Adolf Cornelius Piening commissioned the boat and Dobberstein became its Second Watch Officer (2WO) (Busch & Röll, 1999).

Dobberstein sailed on the successful U-155 for 6 patrols, spending 313 days at sea (Busch & Röll, 1997). This gave him invaluable experience under one of the finest U-boat Commanders in the fleet, Piening. During these patrols they sank 25 ships (135,056 tons) and damaged another one (Rohwer, 1998).

Accident in the Baltic

During training in the Baltic on 8 Sept 1943 Dobberstein's U-988 rammed its sister boat, the U-983 (Oblt. Hans Reimers) which sank with loss of 5 men, 38 survived including Commander Reimers (Niestlé, 1998). Dobberstein and his boat survived the incident.

On 22 May 1944 Dobberstein took his U-988 out from Marviken, Norway for its first patrol. He sailed around the British Isles and then into the English Channel.

His boat was however lost with all hands of 50 men on 22 June 1944 in the English Channel west of Guernsey by depth charges from the British frigates HMS Essington, HMS Duckworth, HMS Domett and HMS Cooke, and a Liberator aircraft (Sqdn 244/L). 50 dead (Niestlé, 1998).