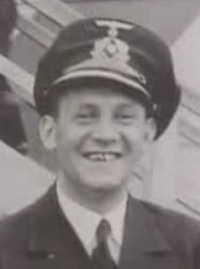 Oblt. Hans-Arend Feindt was one of the youngest U-boat commanders during WWII when he left for his patrol with U-681 from St. Nazaire, France on 6 Jun 1944. He was only 22 years old at the time. He brought his boat to St. Nazaire 10 days later. Feindt then took his boat on a 49 day patrol ending up in Bergen, Norway.

After the war he joined the post-war German Navy, Bundesmarine, and later retired as Konteradmiral (Rear Admiral)