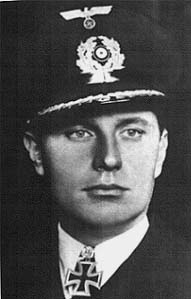 The first U-boat to reach St. Nazaire was U-46 under Oblt. Engelbert Endrass on 21 Sept, 1940. Later this base was the home for two U-boat Flotillas, the 7th which moved from Kiel to there January to June 1941 and the 6th which came from Danzig in February 1942. The base was in full use from October 1942 and reached its peak of activity in July, August and September 1943. 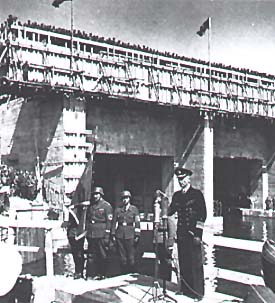 Vizeadmiral Dönitz during the opening

The construction work started in February 1941. The bunker, built on the western side of the basin at Saint-Nazaire, was 295m wide, 130m long and 18m high and contained 14 U-boat pens.

After only 4 months the first pens were ready and so Vizeadmiral Dönitz opened on the 30th June 1941 the bunker. U-203 under Kptlt. Rolf Mützelburg was the first boat to use one section of the newly completed shelter.

Later a sluice bunker was also built, which the U-boats used to reach the sea. (Today you can visit here the French submarine S-637 Espadon.) 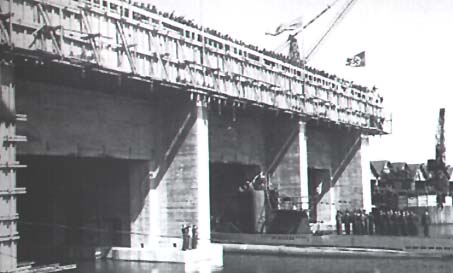 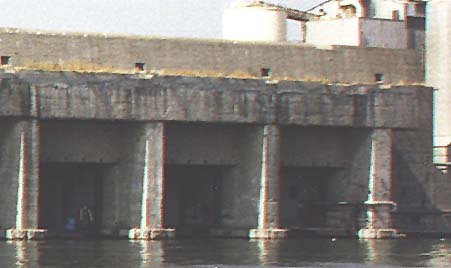 A well known but not successful cattack on St. Nazaire took place in March 1942, when British special units attacked a list of targets. The bunker was not on the list as such, it (and the U-boats) was only to be attacked if the opportunity presented itself. Also 30 air-attacks of RAF and USAAF brought only 18 slightly hits on the bunker, but 62 lost aircraft. So until July 1944 Saint-Nazaire had been pounded with over 2000 tons of allied bombs, almost wiping out the town but not touching the U-boat bunker to speak of.

After the allied landings in Normany in June 1944, the 6th Flotilla was disbanded in August and the 7th Flotilla was moved to Norway. The base was declared a fortress and held out under the command of Generalleutnant Hans Junck until all German forces surrendered on May 8, 1945. Most of the remaining boats left in August and the last two in September, U-267 being the last but one on Sept 23.

The last boat in the base was U-255 which had some damages and was in 1944 not able to leave the base. But in October 1944 a Heinkel 115 aircraft brought some spare parts and in March 1945 came the new commander Oblt. Heinrich with U-878 to St. Nazaire. The boat then made in April a patrol to La Pallice for some fuel and on the 30th April laid a mine barrier by Les Sables d'Olonne. U-255 left the base on 8 May and surrendered at sea 4 days later.

When the base was entered the Type IXC boat U-510 was discovered there, having just returned from the Far East on the 23th April 1945. She was in excellent shape and was commissioned into the French Navy as S-11 Bouan in 1946 and was to remain operational until 1963.

Today the bunker is mostly in private use but the Tourism office can also be found inside it. The 14 pens today provide shelter for sailing boats.