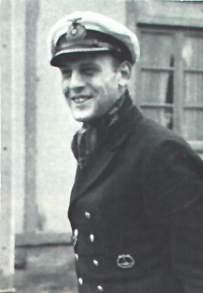 Jebsen went through a Baubelehrung (Construction Familiarisation) course for type IXC U-boats before joining U-123 with Kptlt. Moehle in May 1940 as 1WO (Busch & Röll, 1999). He went on 2 patrols with the boat, 48 days at sea, during which 11 ships were sunk totalling over 50,000 tons.

Jebsen received U-boat Commander training with the 24th (Training) Flotilla from Jan. to March 1941 before Baubelehrung for the type VIIC U-boat. (Busch & Röll, 1999).

After working up exercises in the the Baltic U-859 left Marviken, Norway for her first patrol on 8 April 1944, heading to the Indian Ocean (Busch & Röll, 1997). She sank three ships of almost 21,000 tons total before being sunk herself by a British submarine near Penang on 23 Sept, 169 days into the patrol. There were 20 survivors, but 47 men died, including Kptlt Jebsen (Niestlé, 1998).