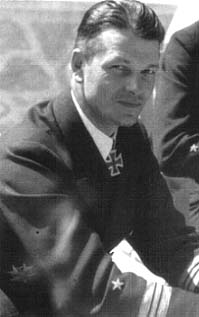 Johannes Liebe joined the German Navy (Reichsmarine) in 1933. From Nov 1938 to Nov 1939 he served as a signals officer at Naval Airfield HQ, after which he started his U-boat training.

On completing his training he was given command of the small type IIA U-boat school boat U-6 on 11 July 1940. Oblt. Liebe commanded the boat until March 1941 when he was sent as a supernumerary Watch Officer on the famous U-48 (Schultze). He went on one 23 day patrol 17 March - 8 April 1941, on which four ships totalling almost 23,000 GRT were sunk.

In May 1941 the recently-promoted Kptlt. Liebe commenced U-boat construction familiarization (Baubelehrung) in preparation for taking command of the type VIIC U-boat U-332 on 7 June.

During his third patrol in U-332 in early 1942 Liebe went to Cape Hatteras, USA but was severely low on fuel and only had six days to operate there. He nevertheless managed to sink four ships totalling over 25,000 GRT before returning to France (Blair, 1996).

After having sunk the American merchantman Raphael Semmes on 28 June 1942, Liebe and his men aided ten of the survivors, dressing their wounds and giving them tobacco, water and food before leaving (Blair, 1996).

After leaving the boat in January 1943 Liebe served in several staff positions, spending much of that time as an adviser on Torpedo evaluation. After the surrender he was briefly detained as a POW, being released on 29 July 1945.