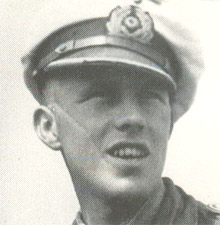 
Karl-Heinz Marbach began his naval career in April 1937. He served for some months in 1939 on the light cruisers Leipzig and Nürnberg. Before transferring to the U-boat force in autumn 1940, he spent a year in a staff position.

After U-boat training he was assigned to U-101 (Ernst Mengersen). Marbach was aboard U-101 from March to November 1941, during which Mengersen sank three ships. Marbach took command of her himself for a month, leaving in February 1942.

After a short commander training course, Marbach was given command of school boats U-28 and U-29. In December 1942 he commissioned the type VIIC U-boat U-953. After seven patrols he was awarded the Knights Cross for acts of bravery.

While he was in Berlin to receive his decoration from the BdU (Commander in Chief U-boats), US troops encircled the U-boat base at Brest. Oblt. Herbert A. Werner took command of U-953, while Marbach went to the AG Weser shipyard in Bremen to commission one of the new type XXI Elektro U-boat Elektro boats.

He commissioned U-3014 in December 1944, but the boat never saw active service, and he scuttled her on 3 May. Following the German surrender in May 1945, he remained a POW until February 1948, being among the last U-boat men to be released.

After the war he joined the Bundesmarine (Federal German Navy), and later retired as Korvettenkapitän (Lieutenant Commander).

Karl-Heinz Marbach wrote about his service in U-boats in Von Kolberg über La Rochelle nach Berlin (From Kolberg via La Rochelle to Berlin).