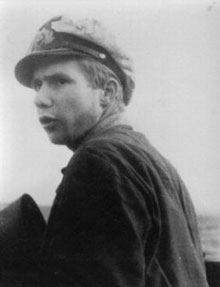 Having received a solid prewar training in U-boats, Ottoheinrich Junker was for nearly four years a member of the TEK (Torpedo Testing Command) before he commissioned U-532 in November 1942. This U-boat was one of the Monsun-boats and headed back from Djakarta in January 1945. The boat surrendered in May 1945 in England. Junker spent then until February 1948 in captivity.

Thanks to Mr. Stewart Gemmill for additional information.